The Orphans of Mersea House 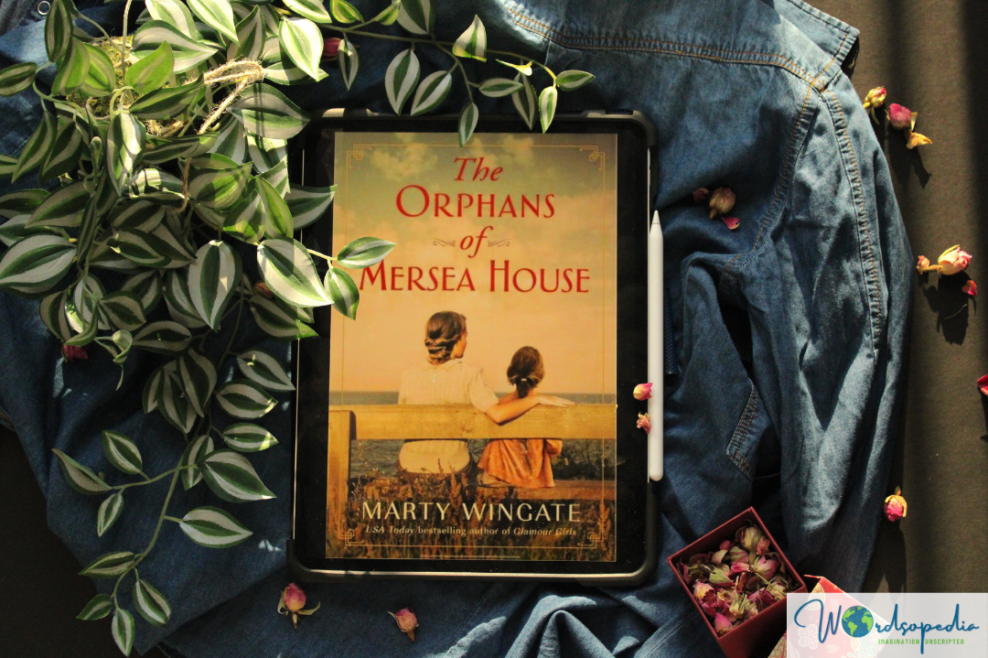 If I have to describe The Orphans of Mersea House by Marty Wingate in a single word, I would say ‘heartfelt.’

Set in 1957, in a charming seaside town, Southwold, England, this character-driven story is about love, friendship, acceptance, and second chances.

Olive Kersey, Margery Paxton, and Juniper Wyckes are the central characters around whom the story develops.

37-year-old Olive has recently lost her mother. She is lonely and on the brink of poverty. Her grave financial situation leaves her with two options–either apply for a caretaker’s job in a faraway town or become a companion to Mrs. Constance Binny, the town’s unofficial news broadcaster. Thankfully, the return of her childhood best friend Margery from London fills her with a fresh ray of hope. Margery has recently lost her uncle Milkey and has inherited a small shop and Mersea House – a stately home which she plans to turn into a lodging. She employs Olive as a caretaker to run and manage the lodging.

The arrival of the very first guests–Hugh Hodson, manager of the town cinema, and Mrs. Abigail Claypool, a recluse war-widow sends the rumour mills working overtime in the small town.

Mrs. Lucie Pagett, a Children’s officer, turns the lives of Margery and Olive upside down with an unexpected revelation – Margery is now to become the guardian of 11-year-old Juniper, the orphaned daughter of Margery’s ex.

Juniper is an intelligent and cheerful child. Polio-stricken since her early childhood, she has certain special needs. Unable to meet her requirements would lead to placing Juniper in a welfare home. Olive completely fills the role of Juniper’s guardian, becoming more of a mother to the child. Margery’s business roars and soon she signs up Olive for driving lessons. Mr. Charlie Salt, the driving instructor, soon becomes Olive’s friend and companion.

But Mersea House isn’t a regular home. Every member has a secret to hide, a past they do not wish to reveal. As the secrets come out in the open, relationships border close to destruction, sending the lives of all in turmoil.

It would be unfair to the author and publishers if I reveal the finer details of the story. All I can say is, read on to know more. You won’t regret grabbing this book.

This book has a gripping storyline and lovely setting. But what makes it more endearing is the narration. Wingate holds control of the flow and narrative all throughout. Nowhere does it feel that the story is sliding down a slippery slope. The story is set in the post-war UK, but there isn’t much focus on the historical aspect of the war, rather it is more on its effect on the lives of the townsfolk.

Created in a nuanced manner, the characters finely fit with the olden times. Every person plays a role in the story without overshadowing others. Their fears, insecurities, losses, and hopes are well depicted. It is impossible to not fall in love with the well-rounded characters. Their back-stories are revealed at appropriate places, helping the reader to get to know them at ease.

While Olive and Margery’s friendship is delightful, Olive’s relationship with Juniper is one of kindred souls brought together. Mrs. Wilkins is the hero the world needs more of. Billy, Hugh, and Mrs. Abigail are the friends one can always count on.

There are a couple of scenes showing an intimate physical relationship between two characters. Even these have been done tastefully, keeping in mind the period in which the story is taking place. I doubt whether women would have been this forward in the 1950s…

The author has addressed issues like polio, same-sex love, death, loss, and longing sensitively; especially the way she has depicted Juniper, a person afflicted with polio is inspiring and heart-warming. The townsfolk’s reluctance, prejudice, and acceptance are depicted with raw honesty.

The story unfolds in a soothing manner, leading to a touching and happy ending. I am certain that it wouldn’t be easy to achieve considering the historical setting. Though the author doesn’t highlight the practical difficulties of that perfect ending, it hardly lessens the beauty of the story.

I would recommend The Orphans of Mersea House to fans of historical fiction and to those looking for a story brimming with hope and positivity.

Thanks to NetGalley and Alcove Press for the ARC.

USA Today best-selling author Marty Wingate writes The First Edition Library series (Berkley) set in Bath, England, about the curator of a collection of books from the Golden Age of Mystery. Book one, The Bodies in the Library, concerns murder among an Agatha Christie fan-fiction writing group, and in book two, Murder Is a Must (October 2020), an exhibition manager is found dead at the bottom of a spiral staircase. Marty also writes historical fiction: Glamour Girls (Alcove Press, January 2021) follows Spitfire pilot Rosalie Wright through both the physical and emotional dangers of the Second World War. Marty writes two further mystery series: the Potting Shed books (Alibi) feature Pru Parke, a middle-aged American gardener transplanted from Texas to England, and the Birds of a Feather series (Alibi) follows Julia Lanchester, bird lover, who runs a tourist office in a Suffolk village.

Is E-Commerce the way ahead for MSME?