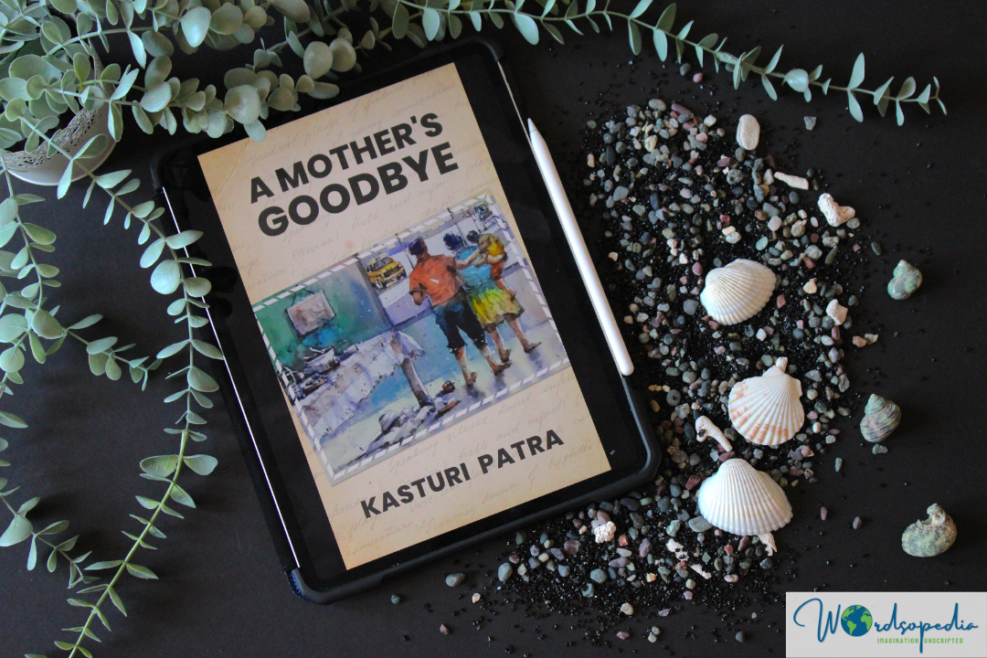 A Mother’s Goodbye is Kasturi Patra’s debut work. Set in 2010 in Kolkata, it is an intricately woven coming of age story of three fatherless siblings Avik, Mou, Ishaan and their mother Deepa.

From a child’s point of view, a mother’s goodbye could only mean one thing–her death. But the scenario here is totally unimaginable. Patra’s pen commits the grave blasphemy of a mother abandoning her children. We are not strangers to stories of children abandoning their ill or aged parents, but a mother leaving her children to fend for themselves is unbelievable and unforgivable.

Avik, the eldest son at 17 years and Mou, his younger sister aged 16, are shocked beyond words to find a letter from their mother, informing them of her decision to leave. Distraught as they are at the shocking news, they also realize they are now responsible for their 8-year-old brother Ishaan. Everyday living becomes a challenge, but the siblings push themselves hard to survive. Apart from daily challenges, their determination to find their mother keeps them going.

In their quest to find their mother, they face many hurdles and heartbreaks, but also come to terms with their sexuality and unearth various unknown facets of their mother’s personality.

The resolution is as unexpected and unique as the premise.

Patra’s writing is simple, non-judgmental, and well-curated. She has handled the intense and emotional issues with a sensitivity, which made my reading experience even more beautiful. The author doesn’t make us hate the mother for her choice, but sensitizes us to understand the reason behind her drastic action.

“…when your entire life has been lived for others, you might want a way out, despite loving the people in your life to bits…”

Another aspect I liked a lot is the character building. Patra has created balanced three-dimensional characters, and she doesn’t hide their flaws and virtues from the readers. Apart from these siblings and their mother, other characters like Rishi, Sohini or justify their presence in the story and leave an impact.

The relationship between the siblings is quite realistic. Their love for each other, petty arguments, sacrifices and the bond they share is well depicted. Their struggles to lead a regular teenager’s life amidst the drama unfolding in their lives was heart-breaking.

Relationship issues, abandonment, survival and mental health are the underlying themes holding this story together.

With a dual narration, we see the story unfolding through Avik and Mou’s eyes. Though the narrators are different, their character voices are quite similar. Probably because of the less age gap between them, they lack a distinctness. But it doesn’t affect the narration negatively.

I applaud the author for her brave attempt at writing a story which is against the expected societal norms. A Mother’s Goodbye is an honest and heart-felt story.

I received this novel from the author as a prize for winning a short story contest.

She was so much more than just our Ma. Isn’t every mother that way? We assume they’re just these generic lumps of women steeped in the sacrificial essence of motherhood, but I wonder how many fragrances are hidden beneath that strong scent, waiting to be released? These women are such beautifully complex creatures and we reduce them to the role of just being our mothers.

Can a woman want more than her identities of a daughter, a wife, and a mother?

Can we love and accept our parents even if they’re deeply flawed humans with their own dreams and desires?

Sometimes, life makes you do things you never imagined you were capable of doing.

You’re as beautiful as a peacock. Be proud of your beauty. Don’t be afraid to flaunt your wonderful self. Just because some people don’t understand it, doesn’t make you any less beautiful!’