An Educated Woman in Prostitution 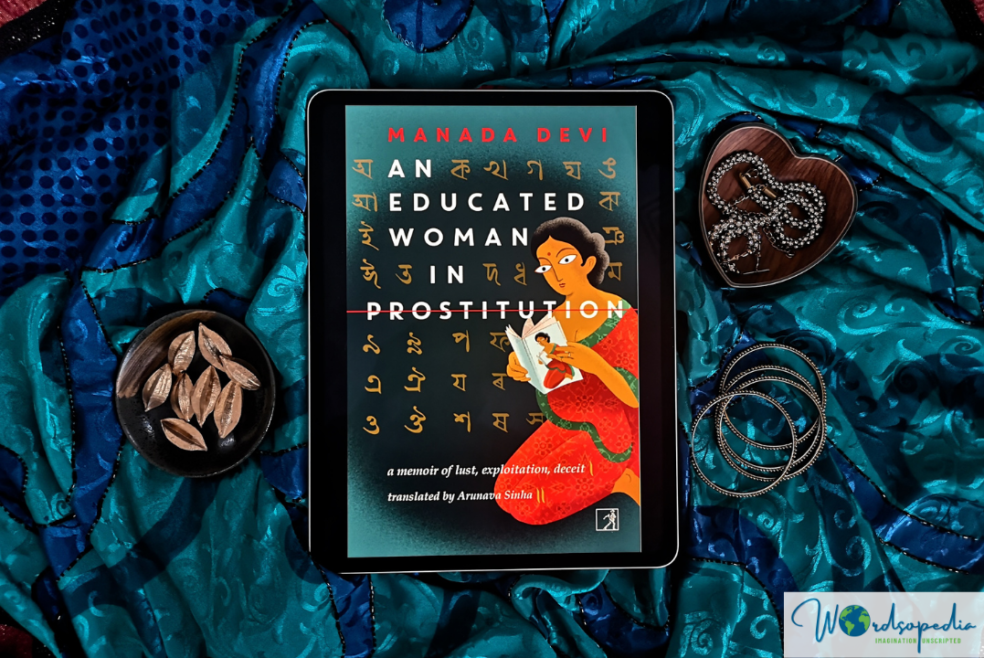 It’s a universally known fact, society frowns upon prostitutes. Often treated as ‘less human,’ they are a shunned and neglected lot. Rarely do we empathize with them, or even try to get to know the story behind the face. This book is a poignant narration of the lives of prostituted women, as narrated by someone who is a part of this community.

Originally published in 1929 in Bengali, this edition is an English translation by Arunava Sinha.

Set in the 1900s, in erstwhile Calcutta, An Educated Woman in Prostitution is the life story of Manada, a girl born in a Bengali Brahmin family – a fairly well-to-do family, with quite a standing in the society. Leading a happy, carefree life, Manada’s life takes a turn with her mother’s demise, and the arrival of a stepmother. Her father’s neglect and lack of motherly love and affection pushes her to seek solace outside. She finds joy and comfort because of her friendship with Kamala, cousin Nanda dada, tutor Mukul dada and a distant cousin Ramesh dada.

‘There was no maternal affection or love and care to hold me back. Today I feel that I would not have walked on this road had my mother been alive. If my father had turned his attention to me even once, if he had been even slightly caring or if he had controlled me, my life would possibly have taken a different turn.’

Lack of an appropriate and virtuous education blinds her to the harsh realities of life. And at the tender age of 15 she goes astray, and runs away from home with Ramesh dada, the first in many of the mistakes she makes in her life. Her relationship with Ramesh dada results in her walking on a path of sin which ultimately leads to her downfall. Not only in the eyes of society, and her father; but even her own.

In no time she realizes the futility of her decision, but by then it’s too late to return to her father.

‘Illegitimate love is always born out of passion. But passion is by nature short-lived, and not the result of discernment. Therefore, a love that arises swiftly ends swiftly too.’

Left by her lover, and shunned by society, Manada embraces prostitution as the way of life, entertaining men of high society. She even joins the non-cooperation movement, but her lack of self-constraint and insincerity dilutes her intentions. Overwhelmed by temptation and unrestrained, she sinks into the immoral life, blaming it on her destiny. Entertaining several Babus, trading her body for goods, exchanging pleasure for money Manada becomes Feroza Bibi, and over time Miss Mukherjee.

The memoir though set in early 1900s is not very different from today. There are many instances where I could draw similarities with our current times. A motherless child neglected by her father makes the wrong choices, and her father refuses to accept her back. Very much an everyday instant.

Manada’s experiences clearly highlight the society’s hypocrisy. While society shamed and shunned the prostitutes, the men visiting these very women continued to be held in high regard, and led happy lives with no shame or guilt. Unfortunately, we have progressed little even today.

Arunava Sinha is an award-winning translator of Bengali fiction, non-fiction and poetry into English. Over 60 of his translations have been published so far in India, and several of them in the UK and the USA. He teaches Creative Writing at Ashoka University and is the Books Editor of the politics and culture magazine Scroll.in. His recently published translations include Taslima Nasreen’s Shameless, Bani Basu’s Moom, and Desire for Fire: An Anthology of Modern Bengali Poetry. His translation of Ashoke Mukhopadhyay’s A Ballad of Remittent Fever was longlisted for the JCB Prize 2020, and his translation of Manoranjan Byapari’s There’s Gunpowder in the Air was shortlisted for the JCB Prize 2019. Get in touch with the author here

Scrabble in the Afternoon

[…] in 2017 and also adapted into a movie, Goynar Baksho, in 2013. Earlier this year, I had read An Educated Woman In Prostitution, another Bengali work translated by Arunava […]