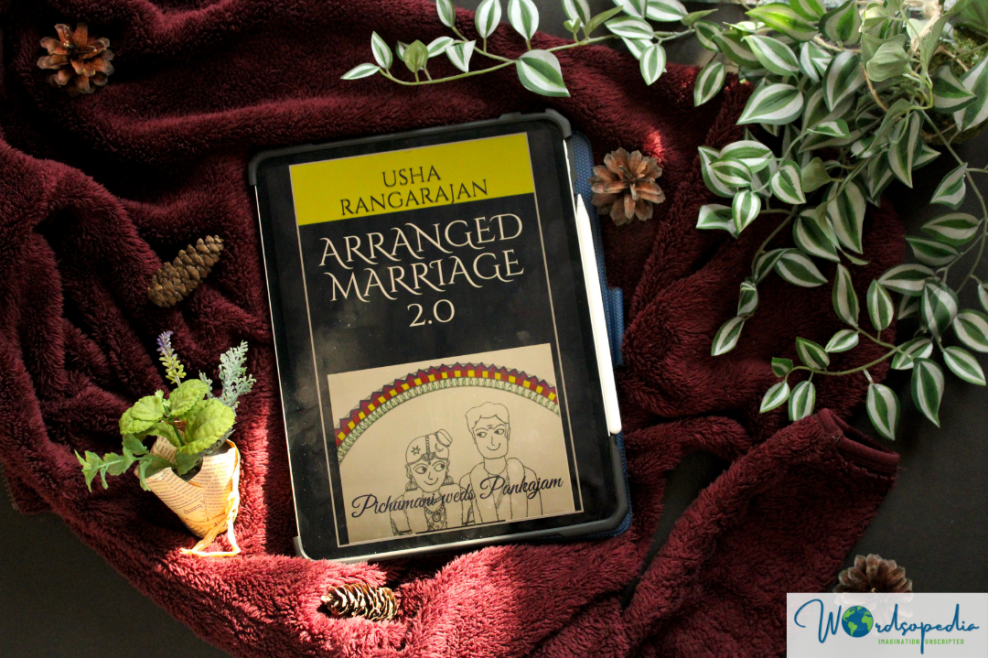 One of my reading resolutions for 2022 is to pick up more books written by Indie authors, particularly Indian authors. With this thought in mind, I randomly picked up a book that popped up as a recommendation on Kindle Unlimited. Arranged Marriage 2.0 by Usha Rangarajan tempted me with its simple and cute cover. The blurb seemed interesting too.

Did I hear a tiny voice in my brain reminding me not to judge a book by its cover? Not sure, I think I shushed it!

As is obvious from the title, the story is of an arranged marriage–version 2.0. Siddharth and Shubhashini, the central characters are young IT professionals, born in Tamilian brahmin families. The 28-year-old guy has been in and out of relationships and wishes to settle down since almost all his peers are married now. It is Siddharth’s wish that his parents arrange the alliance for him, much to their reluctance. Shubha, on the other hand, is just 23, but under pressure to get married. God forbid, if she goes for love marriage and chooses a north-Indian guy, how will her parents face their relatives! This is where the eye roll movements started and did not stop till the very end!

Apologies if my review reads harsh, but there isn’t much in the story to talk about, except that it’s a long tale of two youngsters getting married. Add in a bunch of nagging opinionated relatives, matching of horoscopes, the mandatory meeting where the couple is ‘allowed’ to talk to each other without the supervision of adults, fixing of dates and venue for the wedding and shopping, oh, never-ending shopping! That’s the gist of the story.

If that wasn’t enough of a trope, the stereotypical portrayal of south Indian girls as dusky and fat with names such as Pichumani and Pankajam completes the job. Though, of course, these names aren’t used even once in the entire story. Oh, and did I mention, the Tam-Brahms are in love with mutton biryani, chicken tikka, wine, and beer?

The poorly created characters would remind one of the movie Meenakshi Sundareswar!

They are vain and shallow, while the female protagonist cannot think beyond looks, complexion, and dresses, the male character is chauvinist and selfish. There is something wrong with him!

When his mother complains that she is tired of cooking separate meals for every member of the family, his response is,

“Amma, you don’t care for me!… You know I need to work-out and don’t have time to make my smoothies before I leave for work. It is such a small thing, why are you making a fuss?”

None of the characters are memorable or likable, except for Priya, the groom’s mother. There is a guy named Hari, the bride’s brother, who is mentioned twice in the story but plays no role.

Apart from the lack of a strong storyline and character arc, this story suffers from poor editing too. Names of characters got inter-changed in a place, the book is filled with glaring punctuation errors. The full stop is missing in so many places! The narration, formatting, and spacing need work too.

If I have to mention the positive aspects, I would say the chapters are of small length and there is a helpful glossary of terms and introduction of characters at the beginning.

This is not the author’s debut. I checked her profile and got to know this is her second book. Her first book has 4.5 stars with about 20 ratings.

A few more excerpts which sent my eyes rolling like crazy –

Sid quickly learnt the art of saying very little. He now knew that the most important trick to a successful relationship was to never tell the woman in his life the truth about how she looks. Especially when she says, ‘tell me honestly, do I look good?’

Shubha confessed, ‘I hardly ever wear a saree, I feel quite uncomfortable. I’m usually in Salwar Kameez and for formal meetings, my manager insists on trousers and a blazer or saree’ Sid found her candour quite endearing.

Sundari was quite worried about Shubha turning too modern Every day, she reminded her to keep up her traditional upbringing, and not bring shame to the family name.

I do not intend to belittle the author’s efforts, but just wish to convey my honest feedback and hope her next book is a better reading experience.

As regards, Arranged Marriage 2.0, I would not recommend this, unless, of course, you are in need of eye-exercise!

A maverick, born to a traditional family in Chennai, in the South of India, the eldest of three girls. Usha decided to be a career woman very early in life. She worked in several reputed corporates, across multiple industries as a senior leader, for over three decades. Greedy to grab all that life offers, Usha stepped away, started her own consulting firm called UnLEASH. She also volunteers her expertise with social enterprises, pursues her passion for travel, people watching and cooking. Usha is in a long and fulfilling marriage with Rangaraj, and is a happy mother of a young man, Ashwin.