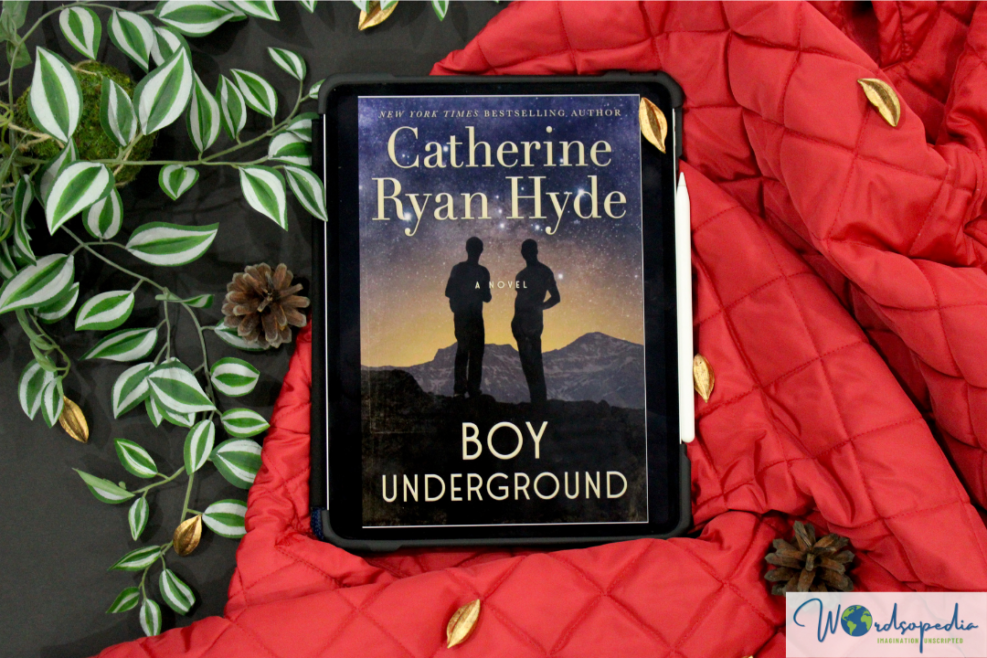 Boy Underground is my first time reading Catherine Ryan Hyde’s work, and I’ve fallen in love with the author’s style of story-telling.

The story, a flashback, is narrated by 94-year-old Steven Katz. Set in 1941, in the wake of the Second World War, it’s the affirming coming-of-age story of 14-year-old Steven, who lives with his wealthy parents and brother in California’s Sierra Mountains. Son of a landowner, Steven is unhappy at home. His mom, Beth, worried about social standing, questions his disconnect from his socially approved and acceptable friends. His father’s chief concerns revolve around making a man of his younger son.

Steven dislikes his mom’s cooking, has extremely limited interactions with his father, and is not attached to his elder brother. His elitist parents hold strong opinions on race, class, and sexuality. Thus, it is no surprise when Steven doesn’t tell his parents of his newly found friendship with Nick, Suki and Ollie; three boys from the other side of the track who are sons of field workers.

Apart from dealing with his family, Steven is stunned at another realization. His feelings for Nick and Suki run deeper than a normal friendship.

On December 6, the four boys go decide to camp overnight in a lake high in the Sierra mountains. When they trek down the next day, the world has changed radically–the Japanese have bombed the Pearl Harbour. Rumours float around about the coming up of Manzanar War Relocation Camp, an internment camp where the Japanese immigrants would be sent to. These anti-Japanese sentiments put Suki and his family under the threat of detention. With war looming closer home, 17-year-old Ollie has to enlist. And to add to their woes, Nick’s father’s drunken brawl puts Nick’s freedom in danger.

Over the next few weeks, Steven’s life undergoes a tremendous change. With Ollie’s enlistment and Suki’s forced removal to the camp, Steven is left with no friends, except Nick, the boy underground. He takes it upon himself to keep his friend safe, prepared to do whatever is required. The limited correspondence from his friends and an unlikely friendship with a wiser older man, Gordan Cho, gives him courage to do the right thing and make the right choices.

Ryan Hyde’s skill and craft is clear as she has created fully developed characters who are unforgettable and stole my heart. Their journeys of self-discovery and realization make the tale even more beautiful and memorable. Even Steven’s parents are well-etched, reflecting on the times the story is set in. Steven and Gordan Cho remain my favourites from this beautiful tale.

I loved reading the epilogue, set in 2019. It left me in tears, yet wishing the story would go on.

The only complaint I have is regarding the foreshadowing, as I found it a little distracting. But it’s a minor issue compared to the powerful narration and sensitive handling of various themes in this book.

This is a historical fiction based on the second world war. The war acts as a backdrop, but plays an important role in directing the story from behind the curtains and holds the narration together. The friendship between the four friends who are inseparable until war tears them apart forms the central narrative. Each boy has his own story, filled with challenges and difficulties.

Boy Underground is a beautifully crafted story of acceptance and tolerance. It is well written, and character-driven, tugging at the heartstrings. Any reader who enjoys fictional stories based on war would love this.

Thanks to Lake Union Publishing via NetGalley for the opportunity to read an ARC of this novel. All opinions expressed are my own.

Catherine Ryan Hyde is an American novelist and short story writer, with more recent forays and notable success in transitioning from traditional publication towards the world of eBook publication.

[…] I even start writing my review, I have a confession. I love Catherine Ryan Hyde. Yes, I do! I read Boy Underground in 2021. It was so heart-tugging and memorable that I fell in love with the author’s style of […]