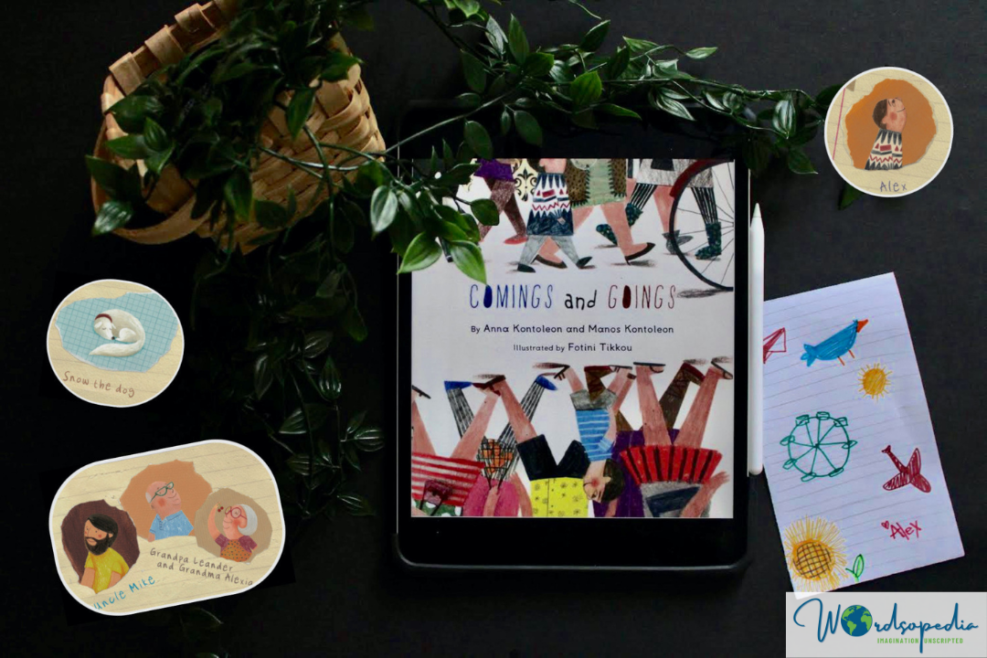 Alex is embarking on an adventure of his lifetime. He is travelling all by himself to visit his grandparents, uncle, aunt and cousins. He is quite excited, ticking dates on the calendar, packing his bags, and even making cards for his relatives.

On the other end, his grandparents, uncle, aunt and cousins are equally excited and are preparing for his arrival. They are busy getting presents for Alex, planning games, building a tree house and even buying his favorite fruits. The story ends at the airport with the entire family receiving Alex with an enormous banner and a warm hug.

The illustrations by Fotini Tikkou are really endearing and convey the feelings, anticipation and emotions clearly.

Younger readers may not be able to read the book independently, and might require help. It’s a delightful book to use as a Read Aloud material. Children in the 7-10 years age range would enjoy reading this book on their own.

Though the different POVs provide multiple aspects, it also adds to a bit of chaos. It is easy to miss the direction arrows, and children might get a little confused with identifying the speaker.

Comings and Goings feels like a travel journal with the map and engaging illustrations. Alex’s adventure is a story many children can identify with–the thrill of travel, the excitement of meeting relatives and spending time with them. It can also soothe children who might be anxious about air-travel.

I received this book from Netgalley in exchange for an honest review.

Anna Kontoleon was born in Athens in 1974, studied drama and acting and works as a drama teacher. She has been writing and translating for 15 years, including fairy tales and novels for children. She was awarded the 2012 Greek IBBY award for The Seven Lives of Kombos and in 2015 won the ‘Award for Translation of a Book for Children’ by the Greek Society of Literary Translators.

Manos Kontoleon was born in Athens in 1946, studied physics, but literature won him over at a very young age. He is one of the most popular Greek children’s authors and has won many Greek IBBY and Society of Greek Writers awards.

Get in touch with Manos Kontoleon on his website.