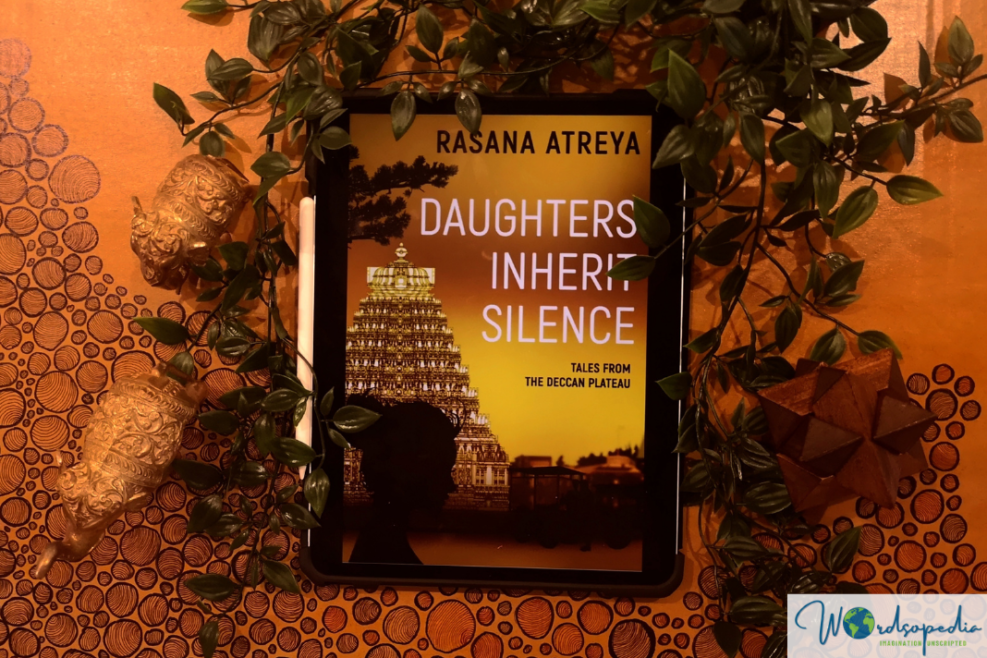 Daughters inherit silence is such a fantastic book, that I can think of only word to describe it–Unputdownable! Though this is the first time I am reading this author’s work, she has done such a wonderful job that I could visualize every character, the scenes and the setting. I did not feel as if I was reading a book, but I felt as if I had become a part of the book.

Daughters Inherit Silence is not just the story of Jaya, but of countless other women brought up to remain silent. At the same time, it’s not just a narration of social stigma and despair, it is a story of second chance. It’s a positively satisfying read.

In many cultures across the world, girls get a secondary treatment. A female is seen as a lesser being. A son is preferred over a daughter. As a mother of two daughters, I’ve experienced it often. The sly glances, the pitiful expression, and the insensitive questioning – ‘oh you don’t have a son?’ The partial treatment, the condescending attitude stems from the deep-rooted patriarchy we have been conditioned to, more often becoming inanimate puppets in our own life stories. Similar is the story of Jaya set in a village Lingampally in Telangana.

Jaya, an engineer, is an intelligent and kind woman. I couldn’t help but admire the way the author has portrayed her character. Her struggles, confusions, and desires are expressed beautifully.

A young widow, and a mother to a ten-year-old daughter (Ananta) she is leading a fairly independent life–managing her computer business, driving a 4-wheeler, and even supporting her in laws financially. And yet, societal norms force her to live an obscure life. Being judged by one and all, every moment of her life being open to scrutiny. Conditioned to lead a life in silence, she fears the silence will be her daughter’s inheritance as well.

The only support is her elder brother Madhav, who stands by her under all circumstances. Madhav and Jaya’s bond is touching and heart-warming. Her relationship with her mother is toxic and non-existent. It’s only towards the end, the author reveals the reason behind it.

Small minds, small thoughts–this proverb describes the villagers of Lingampally perfectly, where even the smallest incident gets blown out of proportion.

Kovid is an American Indian doctor visiting his parents – Jaya’s neighbors. He is a widower; whose daughter Nina is the same age as Ananta. A friendship strikes between the children and subsequently between the adults. Finally, Jaya has a friend with whom she can talk freely, and be herself. But unfortunately, their friendship sends the gossip mills working, and they find themselves in a difficult situation.

The story then proceeds with the way Jaya and Kovid handle the situation, the decisions they make and the way it affects not only them but Ananta and Nini too.

The story has some other well-etched and memorable characters–Ramu, the vegetable vendor; the neighbors Ramani, Pavani, Prakash and Jeff Alcosta. Even Jaya’s self-centered parents-in-law are described in such a realistic and engaging manner, I felt like punching the old man!

The story has a wonderful arc, realistic characters, and extra-ordinary narration. The cultural spin adds a magical touch to the story, making it excellently engaging.

A riveting book from the very first word.

Sharing a line from the book I’d remember for long –

“About what home meant. A life partner that you were happy to go home to. Kids. Good friends. According to him, you could build a home anywhere in the world, if only you had these three ingredients.”

Thank you @Reedsy and @Rasana Atreya for the preview copy.

Rasana Atreya is an Indian English-language author. Her debut novel Tell A Thousand Lies was shortlisted for the “2012 Tibor Jones South Asia prize.” She is also the India ambassador for the Alliance of Independent Authors.

On the streets of Bolena