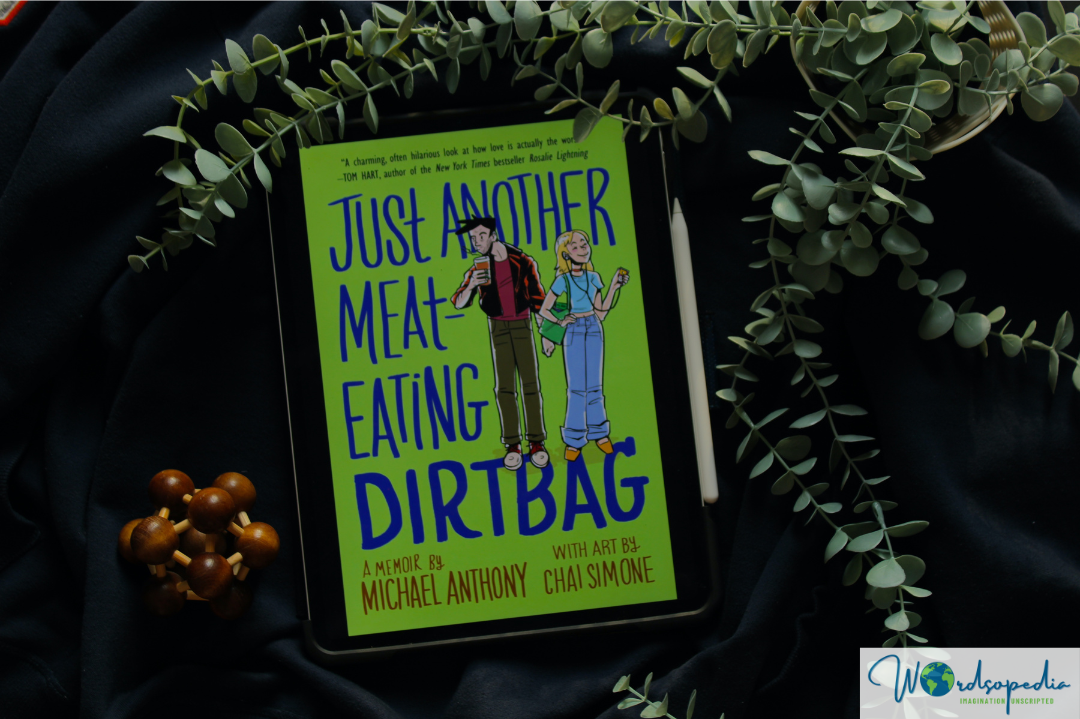 Stand-up comic Michael Anthony’s Just Another Meat-Eating Dirtbag: A Memoir, is a charming and hilarious graphic novel about animal rights, vegetarianism, veganism, and love’s triumph. He also addresses other sensitive themes like body shaming, PTSD, and drug and alcohol abuse.

Anthony, an Iraq war veteran, is in love. He really loves Coconut, his girlfriend, Coconut, but his smooth-sailing love life is in troubled waters when she converts from a vegetarian to a vegetarian plus animal rights activist. Coconut not only wants to make the world a better place, but she also wants to make people better.

He attends seminars at her behest, watches gruesome videos of animals being murdered, and switches to flannel instead of leather. He tries his best to convince her otherwise, even trying to get her to eat meat again, but when his attempts fail, he becomes a part of her group, keeping his “real intentions” to himself.

Anthony is unabashed in his approach. The memoir is detailed and based on facts and figures, including the inhumane treatment followed by slaughterhouses, and the number of animals killed worldwide. He even states alternative sources of protein and does not mask the gory truths behind killing animals for food.

His writing style is quite witty, and the memoir is easy to read despite the gruesome details.

The recommended reading section is good for gaining more knowledge about this topic.

The illustrations by Chai Simone are delightful. Simone has utilised every bit of the page amazingly. I loved how beautifully the illustrations portray the emotions and internal thoughts of both characters. The sketches speak for themselves and convey the tone and emotions of the novel perfectly.

The variations in font style, size, and placement add a unique fun element to the reading experience.

Coconut’s love for animals, perseverance, and steadfastness is praiseworthy. Anthony’s journey is heart-warming and his struggles are honest.

In one section titled, ‘Religion and Animals,’ the author talks about the various religious beliefs surrounding food and the killing of animals.

Anthony states that Hindus do not eat meat, fish, and eggs. This is, however, incorrect. Not all Hindus are vegetarians. Even though the cow is considered sacred, a few Hindus consume beef.

“Because when you love someone, like, really love someone, then you’re liable to do anything to keep them in your life—anything.”

“Anyone who eats meat is therefore a murderer”

“Love really is the absolute worst”

Just Another Meat-Eating Dirtbag: A Memoir is a wonderful graphic novel. I highly recommend it to all, irrespective of their diet preferences.

Michael Anthony is the author of the graphic memoir Just Another Meat-Eating Dirtbag: A Memoir, and the award-winning and acclaimed memoirs: Civilianized: A Young Veteran’s Memoir, and Mass Casualties: A Young Medic’s True Story of Death, Deception, and Dishonor in Iraq.

Michael’s writing has been called “strong … and starkly honest…”-Publisher’s Weekly, “Dark Humored,” –Kirkus, “smart and mordantly funny,” –Milwaukee Journal, and “gut punching…”–Mary Roach. He has appeared in several anthologies, and has written for The Washington Post, Business Insider, Signature-Reads, and The Good Men Project, where he served for a year as chief editor of the War & Veterans section.
He has been featured in several documentaries regarding military service, philosophy, and comedy, and he has worked as a military consultant for award-winning theater and art installations.
A graduate of Bridgewater State University, Michael also holds an MFA in creative writing from Lesley University. A former US army soldier, he currently lives with his wife in Massachusetts and spends his free time working with veterans.

Get in touch with the author through his website.