Our Moon Has Blood Clots 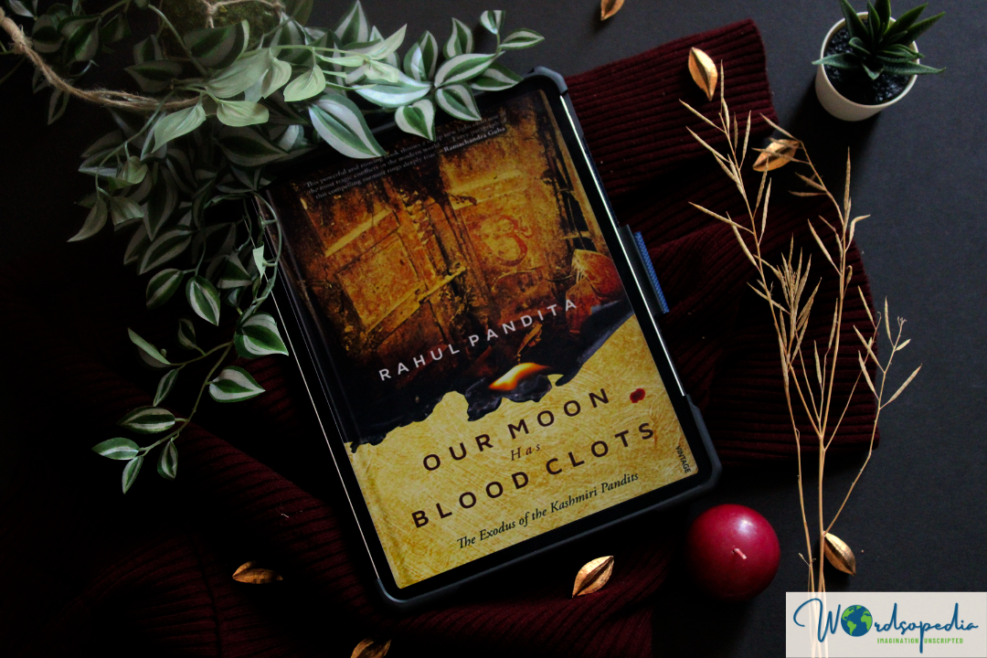 Our Moon Has Blood Clots is a painful memoir written by Rahul Pandita. It is a personal narrative of the brutal ethnic cleansing faced by Kashmiri Pandits in the 1990s as Islamist militants tortured them. Forced to leave their homes, till today many live in a permanent exile–for they know their homes and hearth are lost forever.

Reading this book reminded me of the early 90s when we witnessed a sudden deluge of Kashmiri families in our neighborhood. Overnight, their numbers increased. As a child their milky complexion, accent, traditional dress, and earrings enamored me. Their names and faces are blurred now, but what remains unforgettable are their pained smiles. I was too young to understand the gravity of the situation and couldn’t fathom why they had to leave behind everything. But now that I know, I sincerely wish they hadn’t had to undergo all these sufferings…

In the 1990s, the Kashmir valley was booming with cries of Azaadi from India. The Hindu minority families became the victims and bore the brunt of this violent call. Pandita was fourteen years old when he was forced to leave his home in Srinagar, along with his family. Fleeing from their homes, the little boy questions the happenings – If the Kashmiris are demanding Azadi, why do the Pandits have to be killed? Why do we have to leave our house, where I play freely, and ride my cycle, and exchange comics with my friends? How is the burning of a temple or molesting a Pandit lady on the road going to help in the cause of Azadi?

He chronicles the sufferings endured by not only his family but countless others. He narrates instances of stone-pelting on the homes of Hindu families, slogans of Pakistan Zindabad raging through the valley, and the majority celebrating India’s loss in cricket matches.

It’s extremely painful to read the religious persecution this community has faced since the 14th century, but the political apathy they faced is more revolting.

Forced to live in refugee camps in Jammu, with no jobs and a government dole of Rs. 500 life becomes bleak for these families. It’s just their will and perseverance which keeps them going.

Pandita doesn’t indulge in a blame game but narrates his experience in a straightforward and gut-wrenching manner. He does not soften the stories of pain, agony, and trauma. His writing is honest, emotional, and hard-hitting.

The narrative is not chronological and feels jumpy at times. It took me a bit of going back and forth, but it didn’t mar the essence of the book.

Despite having lost all, Pandita ends the book on a hopeful note. ‘I will come again. I promise there will come a time when I will return permanently’

Our Moon Has Blood Clots is not an easy read. It’s an excruciating reminder of the systemic ethnic cleansing Pandits underwent. It’s deeply emotional and painful. And for these very reasons, I would recommend this book to all.

Rahul Pandita is a journalist, and an author based in Delhi. He is a 2015 Yale World Fellow. He is the author of “Our Moon Has Blood Clots”, a memoir on how Kashmiri Pandits became victims of a brutal ethnic cleansing at the hands of Islamist militants in the valley of Kashmir in 1990 (Random House India, 2013). Shortlisted for The Crossword Book Award, 2013. He has also authored the best-selling “Hello, Bastar: The Untold Story of India’s Maoist Movement” (Westland/Tranquebar Press, 2011), and co-authored the critically acclaimed “The Absent State” (Hachette India, 2010). He has extensively reported from war zones that include Iraq and Sri Lanka. In the last few years, he has focussed most of his work on India’s Maoist rebellion, in Central and East India. In 2010, he received the International Red Cross award for conflict reporting.

Get in touch with the Author on his website.

Chicken Soup for the Soul KIDS: The Sunshine Squad

Thanks for sharing and reviewing this book. Seems an engrossing read, this one. Lot much has been said about the topic, but sadly not much concrete steps have been taken to get them back and re established in their homes. Hopefully, very soon it will be done.

Yes, you have understood the pulse of the book. It is intriguing, and engaging. Hope you read this story soon 😃

I haven’t read anything based on this event in our recent history.. can’t even say it’s history.. would try to read this one..

Would love to know about your reading experience 😃