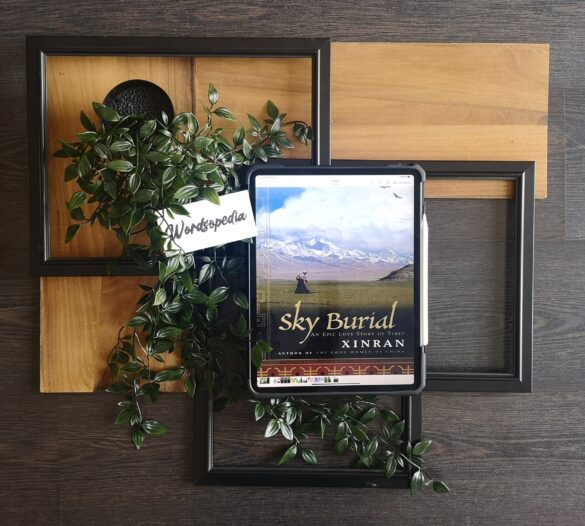 Sky Burial – an epic love story of Tibet is the work of journalist Xinran Xue.

I was drawn towards the book by its title and cover. Was it about some burial custom or was it a love story? With these thoughts in mind I read the blurb and needles to say, it piqued my curiosity further.

Set in 1958, it is the true passionate story of Shu Wen who travels to Tibet in search of her husband Kejun, a doctor who is sent to Tibet by the People’s Liberation Army. She receives a letter from the Army informing of her husband’s demise, but Wen refuses to accept his death and consequently travels to Tibet hoping to find him. Being a dermatologist herself, it is easy for her to join the PLA and she makes the arduous trip to Tibet.

It is not just about the search of one’s lost love. It’s a story about endurance and belief. It is especially about the painful separation of Wen from her parents and sister. It is also about the beautiful bond of friendship between Wen and Zhuoma, a Tibetan noblewoman in search of her groom. Zhuoma and Wen find the net of safety with each other and proceed with their search.

Wen spends twenty years in Tibet, a major part of it with the family of Gela, Ge’er and Saierbao. A nomadic family who give refuge to her and Zhuoma. Living with them, Wen understands their way of life, customs and practices, and over time even starts dressing up as a Tibetan woman.

Wen’s painful ordeal ends when she ultimately receives information about Kejun’s death. It fills her with pride that his death was not in vain and had played an important part in stopping Chinese-Tiber war in that area.

This book also gives us deep insight of Tibetan customs, prayer routines, and rituals like Sky Burial. It portrays the hardships faced by nomadic families excellently.

The pages overflowed with Wen’s loneliness, her love, and most of all her will to survive.  My favourite line from the book – “Separation was not romantic, as I had imagined-it was agony.”

There are stories which suck you in right from the beginning, and Sky Burial is one of those – a must read.

Xinran Xue is a British–Chinese author, journalist and activist. Her first book, The Good Women of China, was published in 2002, sold in over thirty languages and became an international bestseller. She has written two novels, Miss Chopsticks (2008) and The Promise (2018) and four other non-fiction books: Sky Burial, China Witness, Message from an Unknown Chinese Mother, and Buy Me the Sky (2015).

You are the Best Wife