The Ten Commandments of Evil 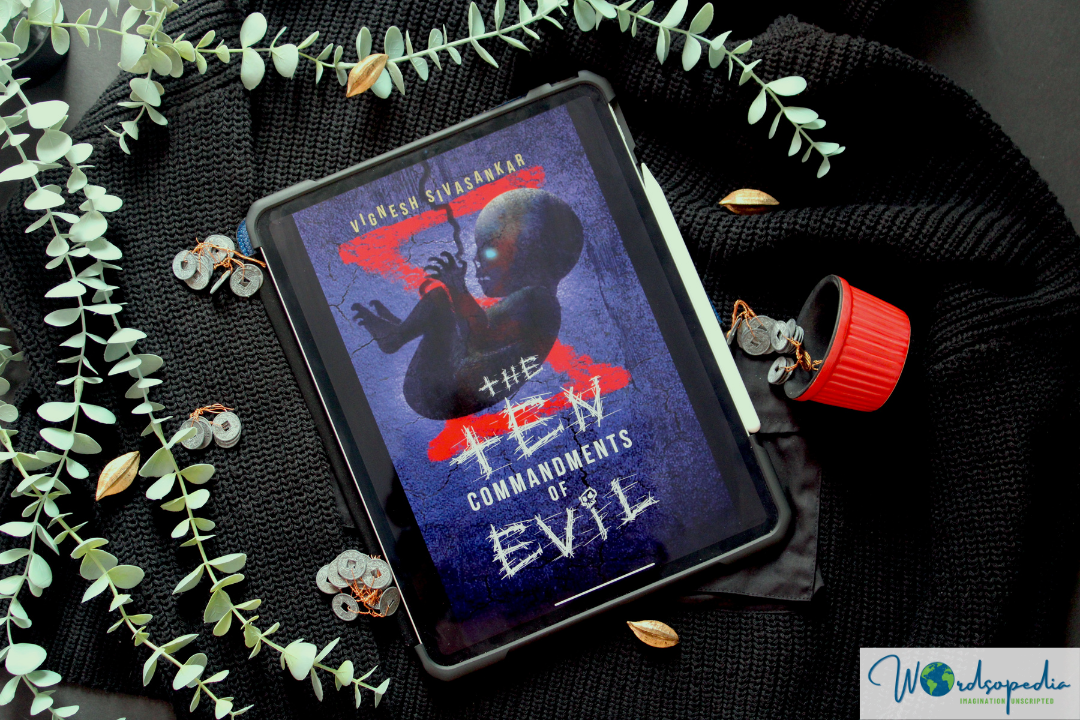 Vignesh Sivasankar’s The Ten Commandments of Evil is a collection of horror stories, inspired by real-life incidents. These are the Devil’s version of the original ten commandments. The spooky cover perfectly prepares the reader as to what to expect. Yes, the stories are horrifying, dark, and unsettling!

The story revolves around Ayanna and her husband, Commodore Abhirup Banerjee. Despite their best efforts, parenthood remains a distant dream. Until, one fine day when 2 pink lines on the pregnancy test kit confirm a new chapter of their lives. The story ahead is unbelievable and scary, as it catapults the readers into a world where an evil supernatural force is at play.

Reeha, a 10-year-old girl, is a special child. She has ‘special extrasensory perception.’ Or, as some doctors call it ‘phantosmia,’ the sensation of smelling things that are not actually present. Dr. Peter, a psychologist, finally solves the mystery behind her ailment. The pungent odours she experiences reveal something sinister.

This is an interesting story with a chilling end.

This story reminded me of Auto Shankar, a gangster who was active in Tamil Nadu in the early 70s and 80s.

Sampath Shekar a.k.a Rickshaw Shekar, a psycho-killer, is our central character in this story. Ramakrishnan, the Prison-In-Charge, narrates the story set in Shalya prison, as the accused Shekar awaits the noose. As the hangman presses the lever and Shekar’s body hangs in the air, struggling for breath, Ramakrishnan recalls the spine-chilling conversation he had with the killer an hour ago, in which Shekar had shared the story of his life. A story which no one else knows, apart from the prison shrink.

Unfortunately, the narration of this story was disappointing. The unrefined language and graphic descriptions of rape and violence were off-putting.

This is my favourite story from this collection. I loved the thrill and pace of this story. It kept me on the edge of my seat.

We follow an unnamed bounty killer as he enters a high-rise swanky apartment in Gurgaon. An experienced killer who has completed 16 ‘jobs’ to date is in for an unexpected and shocking surprise on this assignment.

The killer is an interesting guy, and the author has fleshed his character really well. The story is bone-chilling with an unexpected turn.

This story is as intriguing as the title itself. I wondered why the author had named the story thus, and the little snippet at the end provided the answer.

Govind, our foreign educated protagonist, travels to his native Malaipatti village after a decade. A grand welcome awaits him at the railway station. Govind’s father, though excited, feels let down on spotting Govind’s friend and co-traveler- Reethika. Over the next few days, a wave of panic engulfs the village. A young lad possessed by a witch, the discovery of the witch’s decapitated body, and a series of unexplained deaths rock the village. While the villagers firmly believe it to be the witch’s work, Govind rubbishes their claim.

The build-up and the final reveal made this an interesting read.

Rati, a Kannadiga lady, lives in Bangalore with Kamalesh, her husband, and daughter, Aahana. Fed up with the lack of attention and seeking companionship, she meets Lavesh on Tinder. One thing leads to another, and soon Rati and Lavesh get involved in sexting. And in no time, the day arrives when they decide to take the next step. Unfortunately, a harrowing event occurs the same night, which changes the lives of all the characters in this story.

The final reveal is simply amazing. There are no hints that gave me any clue of what to expect. A very clever move.!

7. Fallen in Love with You

Masum, our protagonist, is a smart girl working in a restaurant. One fine evening, a chance meeting with a good-looking gentleman, Aahva Zaware, sends her heart and head spinning. The love story is anything but a love story!

It’s a thrilling story, but I felt it lacked the element of surprise. I love watching horror movies and could join the dots in the very beginning. Also, I found the overt sexual scenes distracting and distasteful.

This story is based on mythology and demonic forces. Satvi, the sole heiress of a garment tycoon, is a professional cinematographer. Married to a diamond merchant, she is climbing the ladder of success in the film industry. However, all is not well! Certain out-of-ordinary events rock Satvi’s life. Her mother dismisses them as her hyper imagination, despite Satvi’s protests. The series of chilling and unexpected events is outright unbelievable and terrifying.

Story of a couple who undergo counselling to save their failing marriage. The husband, Amitesh, is an entrepreneur who sells ‘sex toys.’ For some strange reason, almost the entire story was italicized.

This chilling story speaks of depraved minds and the extent to which humans can go to satisfy their desires.

As you sow, so shall you reap! This timeless reminder is the essence of this paranormal and spooky story. Garveet Chaubey, a renowned industrialist, meets with an accident that leaves him paralyzed from the neck down. And that is just the beginning of his troubles. Spooky events occur at home, that are visible only to him and no one else. With time, the troubles continue to increase, only to reveal hidden skeletons.

The stories are quite short, narrated in a simple vocabulary, and have excellent pace. The premise is fresh, and every story is befitting the genre. The entire collection is high on horror, and not for the faint-hearted. Gore and suspense held me hooked, even though the treatment lacked finesse.

This is a good horror novel, but could have been much better. It required a bit more editing to smoothen the jarring tense mismatches and the onomatopoeia in the last story is quite bothersome. But my biggest complaint is regarding the sexual descriptions. I don’t know why the author had to lay so much emphasis on kissing, orgasm, ejaculation… It was unrefined, forced, and even unrequired most times. Probably other readers are fine with it, and I might be an exception!

Sharing these few excerpts, just to highlight the scope for improvement. There are many more such examples.

“They kissed each other for a long time, and the world around them fell apart. It was an actual kiss where saliva exchanged, lips created warm friction, and savoured each other’s tongues’ apex. Aahva’s lips were soft, no bad breath, and yes, he was a damn good kisser. They undressed each other, but the smooching never ceased for a moment.”

If you are a fan of short horror stories, you will love The Ten Commandments of Evil, but be mindful of the explicit content.

And one more friendly piece of advice–don’t read this at night. Else, you are in for many sleepless nights.

Vignesh Sivasankar is an award-winning published author of various fictional anthologies. National print and online publishing platforms have acclaimed his credible work. Before he started writing, Vignesh got a graduate degree in engineering and an MBA. He’s an alumnus of Anna University, Symbiosis University, IIM Calcutta, and EDII, currently residing in the scorching heat of Chennai with a candid yet loving critic (wife) and an exceptionally naughty son. Vignesh’s stint as a marketing manager for about a decade in various industries and organizations doesn’t match the madness he endured as an entrepreneur for a couple of years. He’s now a fiction writer, penning down thoughts every day

Onam in a Nightie

Against the Loveless World

I must agree that the lines you quoted at the end from the book certainly sound raw and unrefined! :D They sound rather gross, too.

Exactly my thoughts too!

Oh my, you make the book sound exciting. I wish i could read horror. But i liked reading the snippets and thats about all i can handle.

He he! If horror is not your kinda genre, I won’t recommend this one to you…

That’s quite a line up!