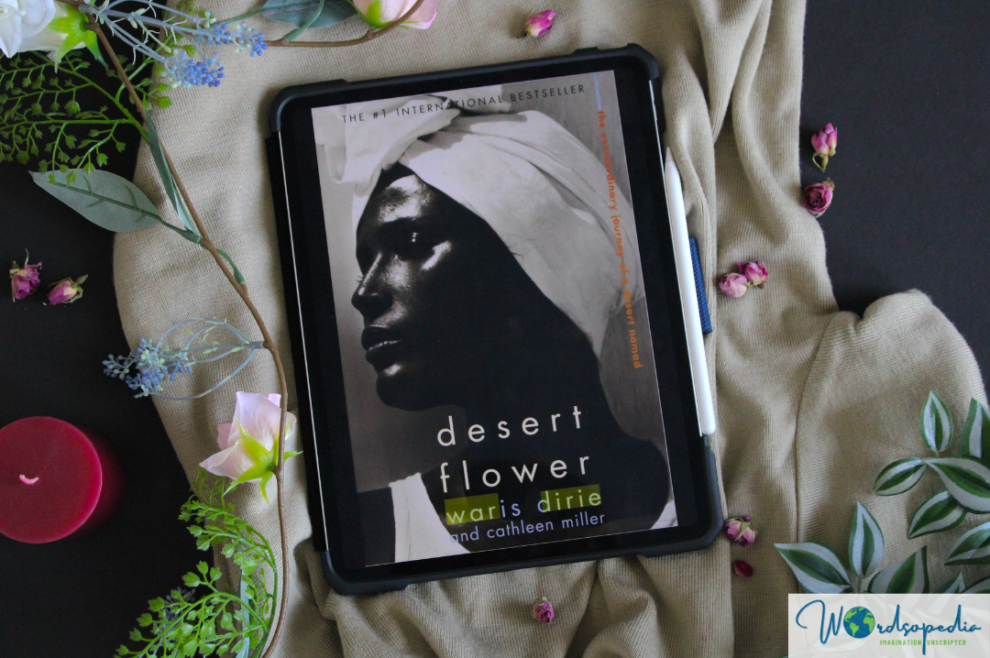 Desert Flower: The Extraordinary Journey of a Desert Nomad is Waris Dirie’s memoir. A Somali model and human rights activist, in this book Dirie anecdotes her life journey – a journey filled with obstacles and her never say die spirit. The writing is raw and unpolished, mirroring the author’s frame of mind and emotions. At times, it feels like a conversation, rather than reading a book.

Born in a nomadic tribe in Somalia, Dirie’s story is distressing and inspiring. Raised in poverty, an uneducated Dirie has a tough childhood. Herding goats and camels, moving from one place to another in search of food and water; daily struggles for survival are an integral part of her life.

Her tribe practices circumcision as it is an excellent investment, and ‘cut’ daughters would fetch a good price. Like the other women of their tribe, Dirie is mutilated at the tender age of 5. Her traumatic memories torment her forever and lead her to fight for a cause she truly believes in—abolishing Female Genital Mutilation (FGM is a procedure which involves cutting of the female genitals. Also known as female circumcision or cutting, it is prevalent in Africa, Middle East and Asia. By this practice, the elders ensure the virginity of girls till marriage. Unfortunately, even after giving birth, their vaginas are stitched again so that the husband wouldn’t be denied pleasure.)

When Dirie turns 12, her father receives a hard to refuse proposal. 5 camels for marrying his daughter to an older man! Her pleas with her father fall on deaf ears, and she has only one option—to run away. She embarks on a harrowing and dangerous journey in search of safety. Illiterate, scantily dressed, and bare-foot, her journey is filled with dangers—from both men and wild animals. Finally, she makes it to Mogadishu, to an uncle’s place.

But she doesn’t stop there. Life takes her to London, where she works as a maid in her aunt’s house. With a bit of luck, help from friends, and a lot of hard work, Dirie enters the fashion industry and scales to the top. But success and fame don’t come easily. There are a lot of compromises she has to make, some quite dangerous and illegal too.

Waris Dirie’s memoir is both a personal and political story. It is about her life and struggles, and also is a reflection of the customs, rituals and pathetic condition of women in Somalia. Females are at the mercy of men-folk. Leading meek lives, satisfying the sexual needs of their husbands and giving birth to many children is what society expects of them.

Dirie’s undying spirit helped her change her fate. She is undoubtedly an inspiring woman. She has opened her life to the world, and is it requires a lot of courage to write such an honest memoir; for she is bound to receive criticism for the choices she made, or the way she acted with certain people and in different situations.

It is a motivating read, but fails as regards its disjointed narration and the diction.

There is no streamlined flow, and the shifting timelines and locales add to the confusion. I felt the profanity could have been reduced, or done away with. Also, there is way too much onomatopoeia!

There are certain parts which could have been written better, especially the one where she meets her mother after years. I am certain it would have been an emotional moment, but the writing failed to reflect it. A better editing would have helped in polishing those rough edges. This book is worth reading, despite the shoddy editing.

With great honesty, Waris Dirie shares not only the painful details of her tough life in Somalia but also the real-life struggle behind the glitz and glamor of modelling world.

Desert Flower is an inspiring tale of a brave and determined woman who beat all odds to survive and shine.

Waris Dirie is a Somali model, author, actress and human rights activist in the fight against Female Genital Mutilation. From 1997 to 2003, she was a UN special ambassador against female genital mutilation. In 2002, she founded her own organization in Vienna, the Desert Flower Foundation.