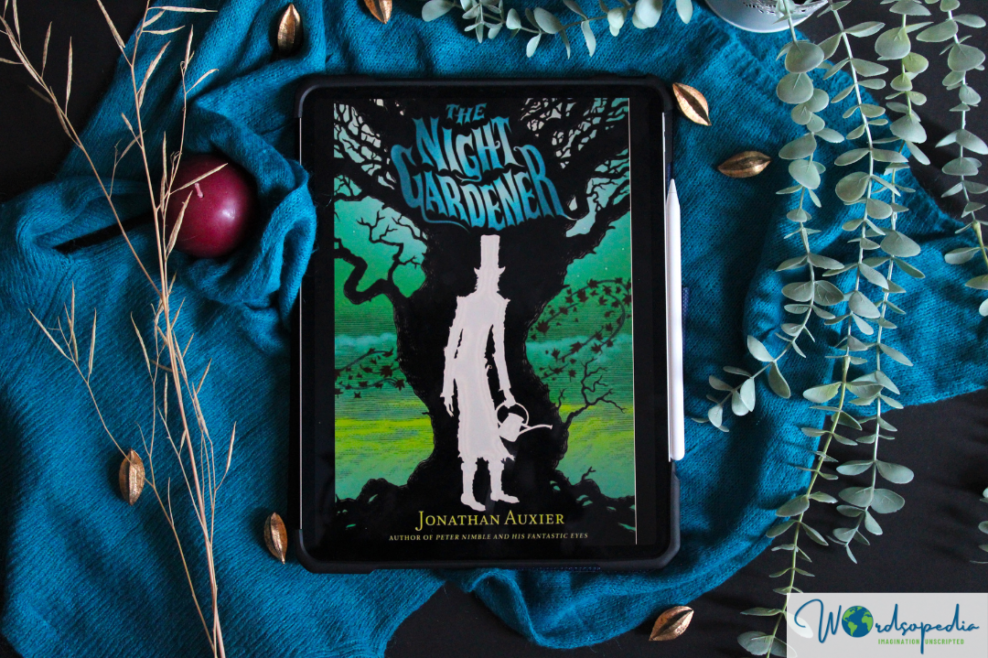 The Night Gardener by Jonathan Auxier is a Middle Grade Horror – Fantasy novel. It is quite creepy, unsettling and suspenseful, having a very Brother Grimm feel to it.

Molly and Kip are a pair of Irish siblings who are on their way to Windsor Estate, a crumbling English manor. Orphaned and poor, they have no option but to take up employment as servants. The local villagers they pass by warn them against going beyond the ‘sour woods,’ which surround the estate. Undeterred, the duo, travelling on their fish cart, makes their way to the manor.

Molly is a wonderful story-teller and can convince people with an ease. Kip has a limp and walks with the help of a stick, ‘courage.’ Determined to survive, the brother-sister strive their best to survive in the creepy cottage along with the strange residents—the Windsor family. In no time, Molly and Kip are in danger as they discover the secret curse which has fallen upon the manor.

The story is not a regular dark fairy-tale. Its strength lies in the writing. Auxier is a master story-teller and his writing is magnificent. It has the power to suck in the reader and place them right inside along with the characters. His command over the language gives the readers a spine-chilling experience.

There are so many phrases which I absolutely adored. I loved the detailed atmosphere building, Victorian setting, and the believable characters.

Auxier has highlighted various important themes in the story. Molly and Kip are children with a never-say-die attitude. Their perseverance and determination to survive is inspiring. I also loved the relationship between the siblings. The way they love and care for each other is heart-warming. There are moral lessons to be imbibed too—handling grief, price of greed, forging friendship without making assumptions and the most important of all—the difference between telling a lie and narrating a story. Xenophobia and the discrimination the children face in the English society is well brought out.

The Night Gardener is an enjoyable Middle Grade horror, not only for the targeted audience, but for teens and adults too.

Jonathan Auxier is a NYT Bestselling author of strange stories for strange children. His first novel Peter Nimble and his Fantastic Eyes was an ABA New Voices pick and a BookPage Magazine “Best Book” of 2011. Night Gardener is a Junior Library Guild selection, an ABA IndieNext pick, an Amazon Editor’s Pick of the Month, and winner of the TD Book Prize and ILA Book Award. His latest novel, Sweep, received six starred reviews, as well as the Governor General’s Award, Charlotte Huck Award, and Sydney Taylor Award. He lives in Pittsburgh with his family and their adorable pet umbrella.

Middle grade horror – I did not know this genre existed.

The cover is absolutely delightful! Adding it to my TBR :)

Hope you enjoy reading it :)