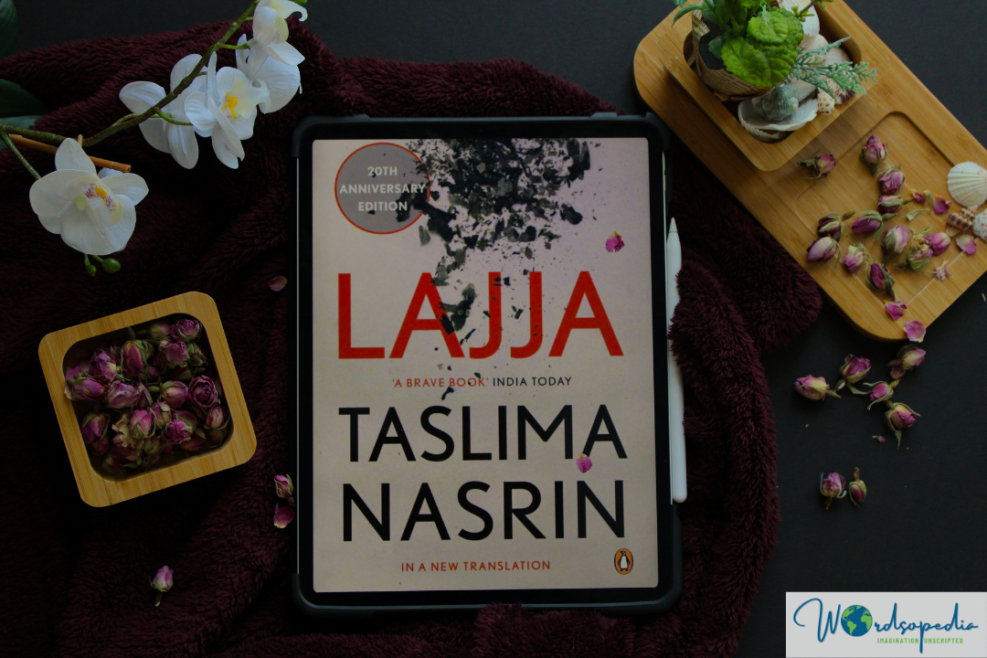 Lajja : Shame by Taslima Nasrin is one of her most controversial works. Banned in Bangladesh, the author’s home country, this book provides an account of the persecution of Hindus at the hands of fascist Muslim groups.

To quote the author, “Lajja does not speak of religion, it speaks about humanity. Lajja speaks not of hate, but love. Lajja asks for equality, not discrimination. Lajja waits for a time of equality, empathy and freedom.”

Set in Dhaka, the story revolves around a fictitious Dutta family of Dr. Sudhamoy, his wife Kironmoyee, and their grown-up children Suronjon and Neelanjona (Maya).

The demolition of Babri Masjid in India in December 1992 causes ripples even across the border in Bangladesh. The Muslim fundamentalists, hurt by the demolition, decide to avenge by punishing the blameless Hindu citizens of Bangladesh. Burning Hindu homes, vandalizing temples, looting businesses and shops run by Hindus, and raping their women becomes their method of taking revenge.

While many Hindus abandon their ancestral homes, farms and shops in search of safety in India; the Dutta family remains adamant and refuses to leave their homeland. Suronjon, and his father are atheists who believe in humanity and nationalism more than religion. Being true patriots, they feel cheated and disheartened as their fellow brethren punish them for acts committed in another country. They have no connection with India or with the attackers, except for belonging to the same religion as the attackers. They suffer in silence as their Muslim neighbors attack their house. Their cries for help go unheard, and force them to take unimaginable decisions.

The narrative is deeply disturbing and heart-wrenching. It shows the true face of Fundamentalists, the skewed sense of nationalism, the plight of minorities in Bangladesh, the government’s apathy and failure to prevent the mobs from unleashing riots on innocent people.

This book is extremely well researched and filled with historical facts. The author shares painful accounts of the atrocities inflicted upon the minority community. There are in-depth details of dates, names of people killed or attacked, temples and Hindu establishments vandalized. These details occupy a bit of the narrative. It comes as information in the form of dialogues, or reminiscences; but feels forced into the storyline and disrupts the flow.

Though the 1992 incident is the inspiration behind this book, the author shares countless incidents of persecution of Hindus right from the partition of India in 1947, riots of 1950, 1964, 1990; and the Liberation War of 1971. Nasrin narrates the manner in which Hindus had to let go of the symbols which were part of their identity—be it the dhoti, bindi, or the traditional bangles worn by Bengali women. But despite all the suffering, they never refused to think of themselves as anything but Bangladeshis. Their sense of nationalism and patriotism never dwindled, unfortunately, the Muslim Fundamentalists could not see beyond religion.

Lajja: Shame is a brave attempt by Taslima Nasrin to highlight the price the Hindus of Bangladesh had to pay.

Taslima Nasrin is an award-winning Bangladeshi writer, physician, secular humanist and human rights activist, known for her powerful writings on women’s oppression and unflinching criticism of religion, despite forced exile and multiple fatwas calling for her death.

She has written 40 books in Bengali, which include poetry, essays, novels and autobiography series. Her works have been translated into thirty different languages.

In the Market of Zakrobat