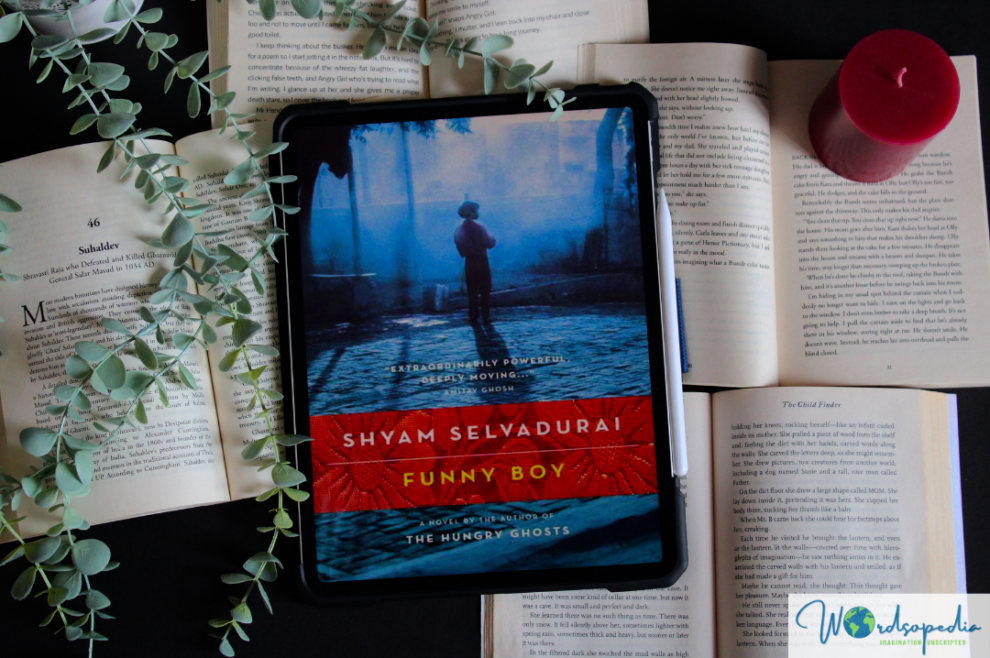 Funny Boy by Shyam Selvadurai is the coming-of-age story of a young boy, Arjie Chelvarathnam. Set in Sri Lanka during the early 1980s, it is an affecting story narrated passionately.

Arjie, the 7-year-old protagonist, is the narrator, and we see the story through the innocent eyes of a child. Others, especially his father and elder brother, see him as a ‘funny boy.’ Arjie prefers the company of his sister, and female cousins. Dressing up in a sari, and playing ‘bride-bride’ during spend-the-days at his grandparents’ home excites him more than roughing it out with the boys. As he grows, he comes to terms with his sexual orientation.

Arjie is a sensitive and observant child, and becomes his mother’s and aunt’s confidante. Being in close company of adults, and eavesdropping often, he is privy to matters which his siblings aren’t aware of. This exposure increases his understanding of the world of adults, and makes him conscious of his race, troubled relationships, political loyalties, and the underlying tension.

Sri Lanka was amid great turmoil in the 1980s, because of the Tamil-Sinhala conflict. Arjie’s family, being Tamils, suffer because of this violence. They face devastating consequences, and their lives undergo drastic changes as the conflict comes closer home to Colombo.

The imagery is quite vivid, and the descriptions of the narrator’s childhood reminded me of the years gone by. When the world of make-believe play was all one needed. No devices or gadgets can match the fun of those simpler days… just the company of cousins and siblings to create joyous memories.

Selvadurai effectively brings to light the ills plaguing the Sri Lankan society – toxic masculinity, intolerance towards homo-sexuality, and the injustice faced by the Tamil minorities.

I liked the usage of Tamil words as they enhanced the beauty of the narration. The vocabulary is simple, but the effect is heart-wrenching.

Homosexuality and the civil unrest form the underlying themes of this story. These are intense topics requiring in-depth narration. However, in this novel, they seem to vie for attention.

The novel has six inter-connected short stories, unfortunately the main protagonist is more of a silent observant in most of them, as the stories revolve around other characters. But I felt these stories left several questions unanswered, especially regarding the lives of characters like Radha, Jegan or the cousins. Since the author devoted several pages to these people, I really wanted to see how their lives continued.

Arjie’s friendship with Soyza could have been further developed. This relationship had more potential, and if the author had explored this aspect further, it would have made for a more sensitive read.

Funny Boy is a moving tale of self-discovery and realization amidst civil unrest, at the same time giving the readers a glimpse of Sri Lankan culture and society.

Shyam Selvadurai was born in Colombo, Sri Lanka, in 1965. He came to Canada with his family at the age of nineteen. He has studied creative writing and theatre and has a BFA from York University, as well as an MFA in Creative Writing from the University of British Columbia.

Funny Boy, his first novel, was published to acclaim in 1994 and won the WH Smith/Books in Canada First Novel Award and in the US the Lambda Literary Award. It was also named a Notable Book by the American Library Association, and was translated into 8 languages.