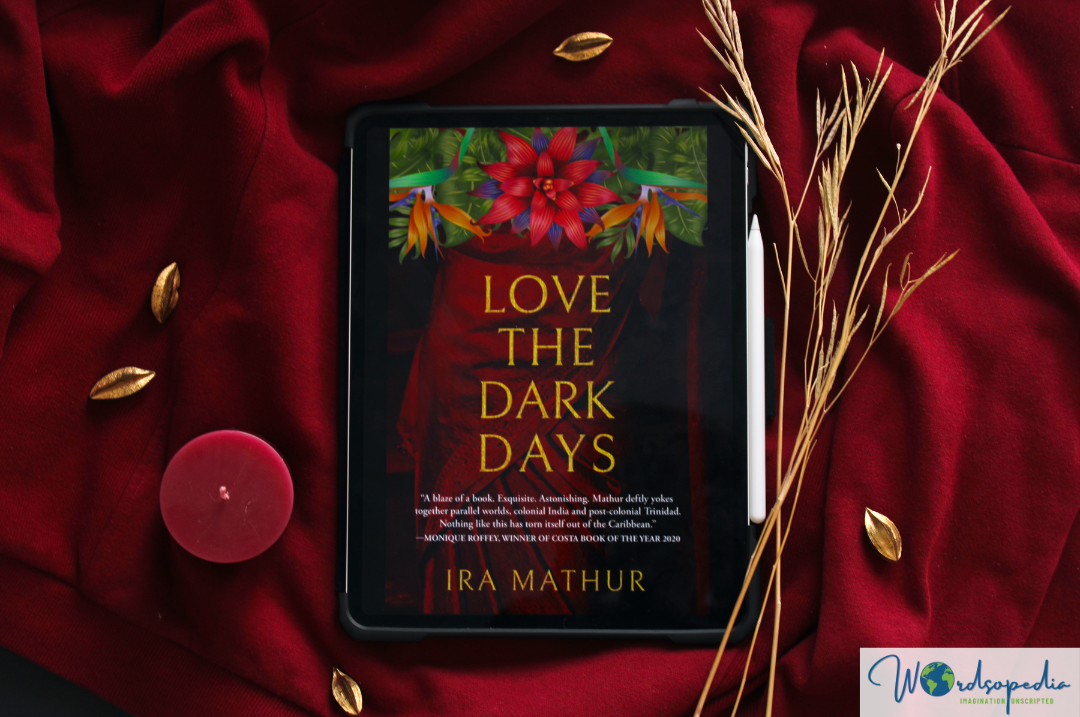 Love the Dark Days, by Ira Mathur, the great granddaughter of the Begum of Savanur, is an evocative memoir of her dysfunctional yet privileged family. Spanning across various decades and set in different locations, this candid memoir sheds light on the Empire, migration and life in pre- and post-independence India, Trinidad, St Lucia, Canada and England. Inter-generational trauma, elitism, cultures, religion, domestic abuse and violence are woven intricately into the narration.

In this layered and transcendental memoir, we come across Mathur’s observations of her family members, her interactions with them, her own life experiences, and the stories of her ancestors. Indian-born Trinidadian Mathur digs deep into the past, hoping to trace her family history and find her story.

Born to a middle-class Hindu father, and an aristocratic Muslim mother who is part of the royal family of Savanur, Mathur’s growing years are turbulent. Growing up in India, living with Burrimumy, her maternal grandmother in their ancestral house in Bangalore, she has a strange love-hate relationship with her. Angel, her younger sister, is her grandmother’s beloved, while Poppet, the author, craves attention.

Burrimummy, a devout Muslim despises Hindus and Christians. Unfortunately for her, her daughter falls in love with a Hindu man and marries him. The already strained mother-daughter cracks further, and the duo grows further apart.

It was interesting to read about the grand opulence and her family’s lost past. Burrimummy’s love for the British empire, despise of democracy, and disdain for Gandhi and Nehru is candidly depicted.

‘When that man in the dhoti, Gandhi, began agitating for self-rule, his great friend Dickie Mountbatten reassured Puppa that he and all the princes of India would keep their autonomy, a privy purse, and titles.’

‘Puppa knew it was over when Nehru said he would not accept the divine right of kings. Of course, by then, Nehru was sleeping with Dickie’s garish wife, Lady Edwina. She reminded me of a hyena, that woman…’

The entire family suffers from inherent trauma and abuse. Poppet’s grandmother, mother, and father are victims of authoritative and neglectful parenting, and it not only affects their persona but also their behaviour toward their three children. They are controlling, absent, and lacking in love. Be it Burrimummy who claims her mother wished she were dead, or the author’s mother who connects neither with her mother nor children, preferring to live in the world of parties and dinners.

“They are like Russian dolls. I understand now. Mummy blames Burrimummy for being unkind. Burrimummy blames Mumma for ill-treating her, and Mumma blames Sadrunissa for thrashing her. They all took out whatever anger they felt over their own lives on their daughters. No one is responsible.”

In 1999, the author visits India to attend a relative’s wedding in Bhopal, the descendents of conquerors who continue to lead privileged lives.

They sit around waiting to be coaxed out of themselves by some delightful diversion, eyes hooded with smoke and alcohol, served by turbaned bearers in white, carrying silver trays.

Unlike her brother and mother, she struggles to blend in with her relatives. Sharing an excerpt that depicts the author’s conflicting thoughts –

No one speaks of the rise of tech in India, one of the fastest-growing economies of the world, or of the prime minster, Modi, changing history books to erase the last traces of the Mughal influence in India.

This statement is factually incorrect, as Modi became the Prime Minister of India only in 2014. I have mentioned it to the publisher.

The narration starts with Burrimummy’s death and ends with Nobel Laureate, Derek Walcot’s demise. Mathur spends a weekend at Sir Derek Walcott’s home in St. Lucia, where he reviews her manuscript and shares his feedback. I felt these chapters broke the flow, and I was dying to get back to her family. The repeated references to Naipaul don’t add much value to the narration.

Love the Dark Days is not just an evocative and surreal memoir of a dysfunctional family, it is also the coming-of-age story of Ira Mathur.

“If you stay in the past, you are as stagnant as pond water.”

“…the love that reassembles its fragments makes it stronger than when it was whole.”

Ira Mathur is an Indian born Caribbean freelance journalist/writer working in radio, television and print in Trinidad, West Indies. She is currently a Sunday Guardian columnist and feature writer.