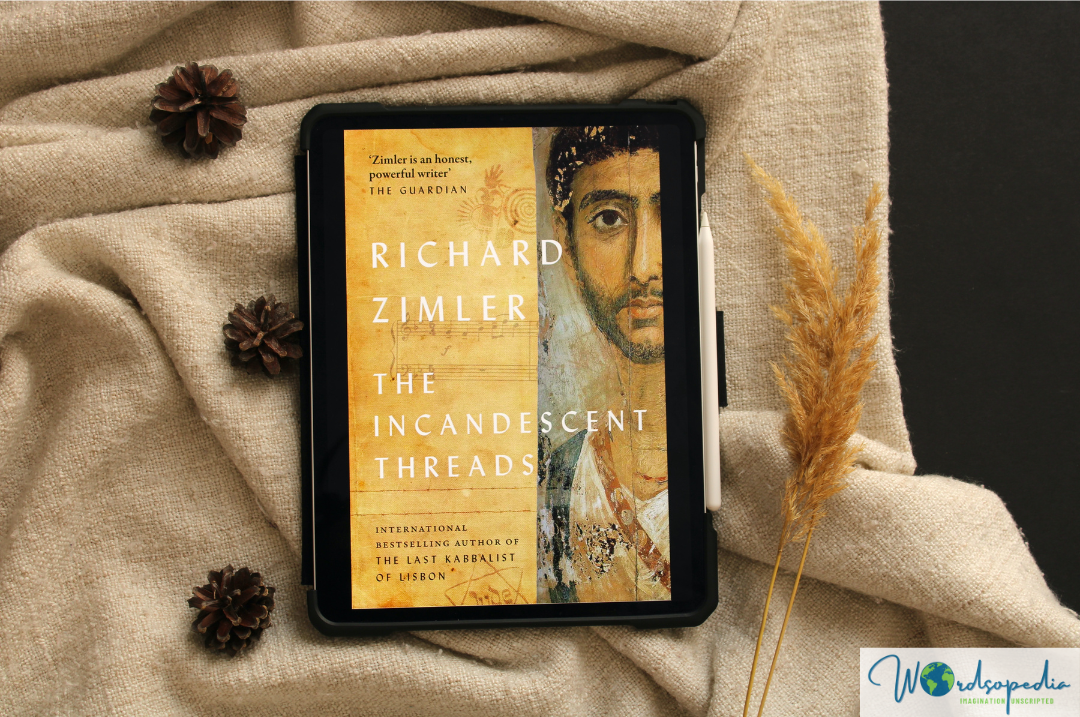 The Incandescent Threads by Richard Zimler is a powerful work inspired by the lives of people affected by the Nazi occupation of Poland. The author has done a brilliant job of tying the past, the present, and the impact of the Holocaust on survivors and their children.

The story starts in 2007 when an old man, Benni Zarco, is being comforted by his son, Eti. Benni is a Holocaust survivor and had lost his entire family in Treblinka. He survives because of the kindness of strangers and his cousin Shelly who brings him to America years later. Benni and his son share a strained relationship and later we come to know the reasons behind it. Benni doesn’t like to talk about his earlier trauma, despite Eti’s best efforts to reach across to him.

The timeline flips back and forth between the war and the present. Narrators change as the timeline changes, and we get to know many stories. The moment one character’s story ends, another picks up the threads and weaves their own story. The intertwined stories are close-knit, well-tied, and impactful in delivery.

Though the author mentions the shift in the timeline, he does not highlight the narrator’s name. I found this transition confusing and had to read a bit back and forth to understand the speaker’s identity. A few chapters could have been trimmed, especially those involving tracing Jewish persecution to Egypt.

I found the reference to a certain mystical experience involving Shelly’s sister, Esther, hard to believe. Other readers may not have an issue with it, but I don’t think it added much value to the story.

All the characters are well-defined. Their flaws make them realistic and relatable. I liked all of them, except Shelly. His sexual escapades, unfaithfulness toward his wife, and surprisingly open acceptance by others, are described in depth. Two instances felt outright wrong and uncalled for.

The first one is in the 1950s when 30-year-old Shelly is on a first date with a 19-year-old. I don’t have a problem with the age gap. But I certainly find the next scene disturbing.

With a confident smile, he told me then it was time for my belle surprise and moved my hand below the table and pressed it into something hard and warm, and it took me a moment to realise he’d taken his cock out of his pants.

The girl, instead of being appalled or terrified, finds it interesting and later even falls in love with him and marries him. Would any girl appreciate this kind of interaction on her first date? Does this description suit the era?

The second is regarding his physical relationship with his cousin Benni, who is just 11 years old when the much older Shelly indulges in a supposedly comforting sexual act with the kid. Pedophile alert!

Zimler’s writing is moving and terrifying. He highlights familial ties, friendship, and the power of the community in a captivating manner. The Yiddish and Ladino vocabulary and Jewish mysticism add a special touch to the narrative.

The Incandescent Threads is a deeply moving story of Holocaust survivors and generational trauma. I would have rated it much higher if not for the uncomfortable and unappealing bits.

I received a free copy of this book from Parthian Books through NetGalley in exchange for an honest review. This does not affect my opinion of the book or the content of my review.

Richard Zimler is a novelist whose works have been published in 23 languages and been bestsellers in 13 different countries, including the USA, UK, France, Italy, Brazil, Australia and Portugal.

Richard was born in New York in 1956. After earning a bachelor’s degree in comparative religion from Duke University (1977) and a master’s degree in journalism from Stanford University (1982), he worked for eight years as a journalist in the San Francisco Bay area. In 1990, he moved to Porto, Portugal, where he taught journalism for sixteen years, first at the College of Journalism and later at the University of Porto.

His new novel, The Incandescent Threads, was published in the UK and Ireland in July 2022 and will come out in the USA, Canada and Australia in early November. It was a number 1 bestseller in Portgugal.