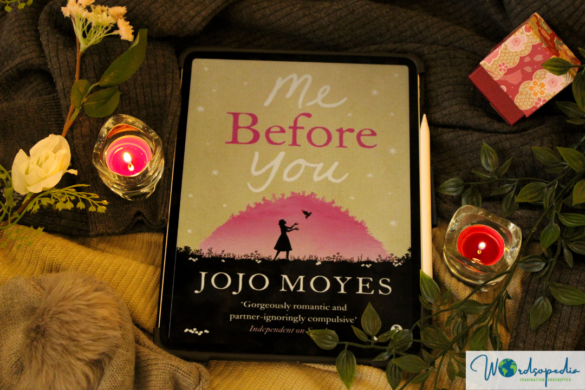 Me Before You is an emotional and achingly beautiful experience. It is the first book in the trilogy written by Jojo Moyes. I wouldn’t call this a romantic story. It isn’t just a story of a boy and girl falling in love. It’s the story of love, longing, and acceptance.

For the first time, I am struggling to write a review. Moyes’s writing is beautiful, and the story is deeply moving, revolving around a sensitive topic. I laughed, I cried, I prayed and hoped for Lou and Will to have a happy ending; but then there is no standard definition of happiness isn’t it!? There were so many sad moments in this book, and yet an equal number of incidents which made me chuckle.

Moyes writing makes one pause and reflect on the experience called life! Life is filed with grey; there’s no clear black or white response in every situation. Whether be it life or death, making the choice and dealing with the consequences is not always easy. Similar is the turmoil the characters in Me Before You undergo.

Both the main protagonists Louisa and Will are well drawn. Their fears, hopes and traits are brought out exceedingly well. They are funny, sad, witty, rude, and even erratic. I absolutely loved Lou and Will. Lou’s optimism, insecurities, and kindness bring her closer to the reader. It was difficult and draining to see Will struggle, but his tenacity and will is inspiring. Despite his disability, and associated complications; he doesn’t come across as a weak character.

Lou and Will’s romance is different. It is not a love based on physical attraction or sex; and even so, it is sweet and subtle.

Every character in this story spoke to me in their own unique way. Even though fictional, Lou’s family is like the family next door. Will’s mum is frosty and yet supports her son in his decision despite hoping for a change.

Throughout the book, I felt Moyes was pushing the reader towards an optimistic ending. And even though Will’s and Lou’s story didn’t end the way I wanted it to, it was strangely satisfying. Though heartbreaking, it was more meaningful and sensible. It is a happy ending, and yet in a few ways it is not…

Me Before You is an unforgettable book, giving a different perspective to life and reminding us not to judge others because of their decisions.

Jojo Moyes is a novelist and journalist. Her books include the bestsellers Me Before You, After You and Still Me, The Girl You Left Behind, The One Plus One and her short story collection Paris for One and Other Stories. Her novels have been translated into forty-six languages, have hit the number one spot in twelve countries and have sold over thirty-eight million copies worldwide.

Me Before You has now sold over fourteen million copies worldwide and was adapted into a major film starring Sam Claflin and Emilia Clarke. Jojo lives in Essex.