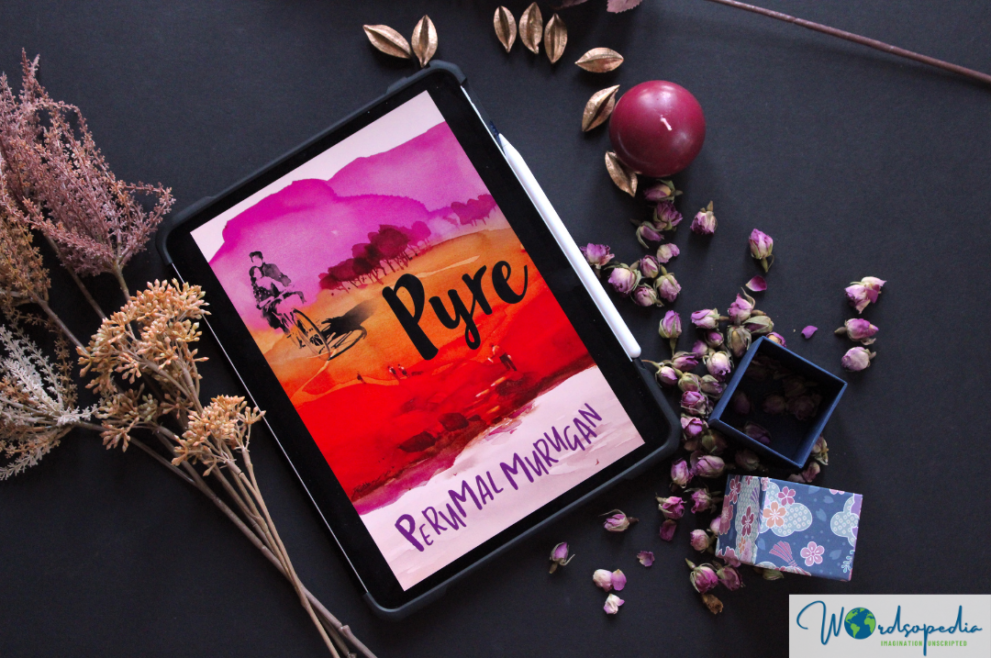 Pyre by Perumal Murugan is the story of Saroja and Kumaresan who fall in love and dare to dream of being together. Originally written in Tamil as Pookkuzhi (2013), and translated into English in 2016 by Aniruddhan Vasudevan, Pyre, is as much a story of love as it is of hate and intolerance. In almost all translated works, there is a nagging pain at the subtle nuances lost in translation and it is felt here, too.

Kumaresan, a native of Kattuppatti, leaves his village to work in a soda shop in Tolur, a neighbouring town. There he comes across Saroja, who lives with her father and brother. Though initially shy, both Kumaresan and Saroja overcome their shyness and acknowledge their feelings for each other.

The couple get married and elope to Kumaresan’s house on the rock in their remote village. They are in for a rude shock as they face Marayi, Kumaresan’s widowed mother. Her welcoming song, a funeral dirge, depicts her dismay and horror at being let down by her son. Their extended family and entire community seethe in fury at the arrival of a ‘fair’ bride. With her complexion arousing suspicions of caste difference, Murugan shows the disparity without explicitly naming any caste.

The young couple have nothing but their love to face the wave of vengeance and wrath coming to engulf them. The ultimatum by the villagers’ scares Saroja, but Kumaresan remains hopeful.

‘Do you think you can antagonize the village and remain alive?’

The story then details the young couple’s life in this village amidst the growing animosity. Narrated in a back-and-forth manner, Murugan takes the readers through shifting paradigms of thoughts and feelings, and their effects on the present and future.

In his trademark writing style, he highlights the hardships faced by the illiterate villagers of Kattuppatti. Their obsession with caste, one-dimensional thinking around rituals and traditions, strict opposition to change and eccentricities lay the foundations of this novel. By focusing on the difference in the settings–be it the busy town, or the poor village; the author highlights the difference in attitude towards castes and the resistance to change.

Saroja’s suffering in the village as she struggles to find acceptance in the claustrophobic environs of the village is highlighted by these lines,

“Not even the wind from elsewhere could enter this space. The air in these parts had circulated within the confines of this place and had turned poisonous. The space would not allow anything to enter.”

Nature remains our other constant companion throughout the story. Be it the rock, the long winding road, the goats or the neem tree. The barren lands come to life in Murugan’s voice.

One of the most striking aspect is the hypocrisy clear in the village. While Marayi and the villagers are benevolent towards Bhai Anna, a Muslim egg trader; their hatred towards Saroja for being from another caste is bone-chilling. Murugan shows us that caste sentiments are deep-rooted and not bound by logic.

“Kumaresan’s mother often said to him, ‘Bhai Anna, you don’t feel like a person from another place at all. You are just like one of us in this village. The only difference is that you go down on your knees every now and then to pray to Allah.’”

Saroja and Marayi are diabolically opposite characters. While the former is silent and adjusting to the extent of never voicing her fear; the latter is loud, intolerant, and unforgiving. Her initial anger at her son for choosing his bride later reach a point of no return, showing her deep-rooted caste feelings. Kumaresan, on the other hand, is optimistic and dreamy. A loving husband and an obedient son, he believes this rejection and hate are temporary and soon the villagers will accept them. Unfortunately, his naivety comes at a cost.

“Whatever I say, Amma will listen… She will worry about what others will say, but it will be all right soon. Don’t be afraid.”

Despite a few early chapters dragging on repetition, it is a worthwhile and meaningful read.

Vasudevan has done a fairly remarkable job at translating not only the words but also the emotions which transcend beyond the boundary of words.

While Tamil words like Nondi, Mapillai, Dey, Ada, saaru-chatti, melolachatti etc are seamlessly woven into the narrative, it was the dialogues which suffered the most in this translated work. In the realm of English language, the dialects are lost. Though we can understand the essence, we are left craving for the subtle nuances and the varied richness which is obviously present in Kumaresan’s and Saroja’s diction.

Murugan ends the novel in a cliffhanger, leaving it to the reader to take it to its conclusion. The optimist me dreams of a happy ever after, but the realistic me knows how it would end in life.

I received an advance copy from Grove Press, the publisher via NetGalley.

Get your copy here on Amazon.

Perumal Murugan is an Indian author, scholar and literary chronicler who writes in Tamil. He has written ten novels, five collections of short stories and four anthologies of poetry.

A beautiful. beautiful review! Loved how you whetted my appetite for the book, without giving too much away. I discovered Perumal Murugan sometime last year and I am in awe of his brilliance! Will be picking up Pyre, based on your review. Thank you for this.

Thank you for your warm words. Do let me know how you find this book :)