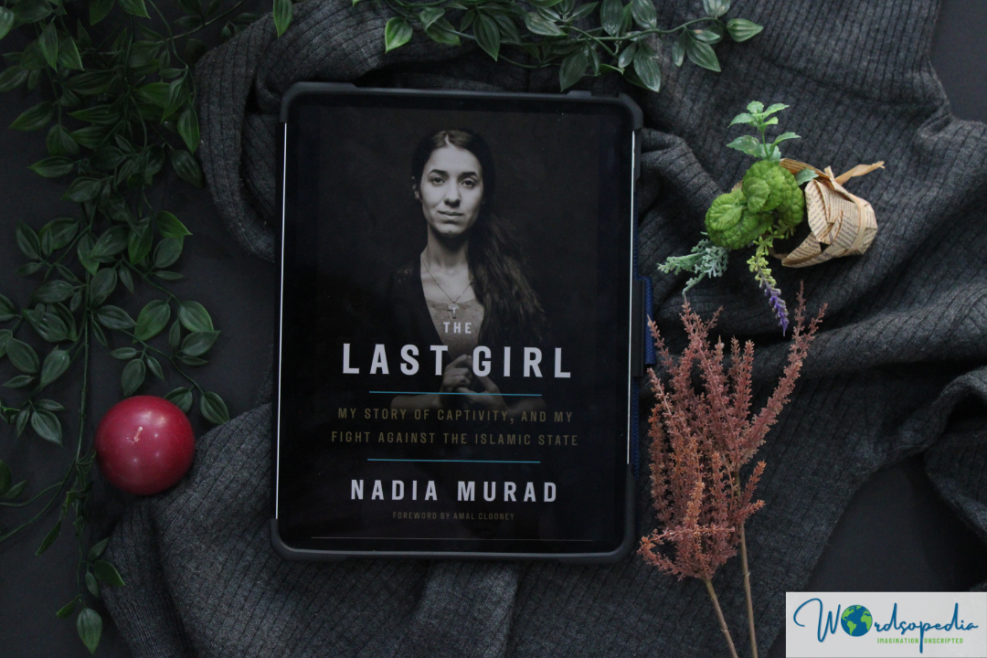 The Last Girl: My Story of Captivity, and My Fight Against the Islamic State is Nadia Murad’s courageous memoir of survival. Winner of the Nobel Peace Prize for 2018, Murad’s story is the story of the devastation unleashed by ISIS militants and the genocide of the Yazidi community.

This is not an easy book to read, but even more important to be read by all.

Murad, a member of the Yazidi community, narrates the story of her peaceful upbringing in a remote village of Iraq, the Islamic State’s unspeakable brutality, the persecution faced by their community, and her daring escape.

Kocho, a village in northern Iraq, is home to the Yazidis, one of the poorest communities in Iraq. Primarily farmers and shepherds, the close-knit community members lead a quiet life. Murad’s large family is not rich, but they are hardworking and loving. Living with her parents, siblings and half-bothers, she is a devout worshipper; proud of their customs and traditions. Dreaming of growing up to be a teacher, the 21-year-old’s dreams are shattered when ISIS (Daesh) militants target their little village in 2014.

Murad begins her narration by describing their quaint village and their religion. Yazidism is an ancient monotheistic religion which is spread orally by holy men as stories. They believe in reincarnation, worship angels and pray toward the sun. However, the Abrahamic religions of Islam and Christianity ridicule their belief system. ISIS believe Yazidis are kuffars (unbelievers – worthy of killing) since they don’t have a holy book. After exterminating all older women and men (except for boys who didn’t have underarm growth) in Kocho, the jihadists kidnap the girls and use them as sex-slaves or sabaya.

Yazidi girls were considered infidels, and according to the militants’ interpretation of the Koran, raping a slave is not a sin.”

Forcefully converted to Islam, Murad is sold off to a skinny judge in Mosul. Thus begins her humiliating ordeals—repeated rapes, beatings and a torrent of abuses. Passed on from one militant to another, there is no end to her sufferings. After weeks of suffering, she flees and, with the help of a brave and kind-hearted Sunni Muslim family, embarks on a heart-stopping journey to enter Kurdistan—a safe place for Yazidis and reunites with her brother.

Despite having lost her mother and six brothers at the hands of the jihadist militants, Murad refuses to be silent. Even in her captivity, she rebels. After escaping from the tormentors, she becomes the voice of every Yazidi who has been abused, raped and persecuted.

I think there was a reason God helped me escape, and a reason I met the activists with Yazda, and I don’t take my freedom for granted.”

In this harrowing memoir, Murad blames not only the ISIS for their sufferings but also their Sunni Muslim neighbours and Iraqi Kurdish fighters (peshmerga) who failed to protect them. She questions the politicians who turned a blind eye to the Yazidis, and the Americans who abandoned them. America’s actions, as described by Murad, are strikingly similar to the current situation in Afghanistan. Destabilizing the region, leaving behind arms and ammunition which get into the wrong hands.

When I picked up this book, I was curious about the title. I found my answer in the last line of the Epilogue –

“When I finished telling my story, I continued to talk. I told them I wasn’t raised to give speeches. I told them that every Yazidi wants ISIS prosecuted for genocide, and that it was in their power to help protect vulnerable people all over the world. I told them that I wanted to look the men who raped me in the eye and see them brought to justice. More than anything else, I said, I want to be the last girl in the world with a story like mine.”

The Last Girl: My Story of Captivity, and My Fight Against the Islamic State is a chilling, distressing and courageous memoir. It is not only the reminder of the existence of evil, but also a testament to the tenacity of human spirit. It is a story of bravery and conviction.

Cannot recommend this book enough to one and all.

A parent’s love could easily become a source of pain.

We treat happiness like a thief we have to guard against, knowing how easily it could wipe away the memory of our lost loved ones or leave us exposed in a moment of joy when we should be sad, so we limit our distractions.

Get your copy here on Amazon.

Nadia Murad is a human rights activist and winner of the Nobel Peace Prize. She is the recipient of the Vaclav Havel Human Rights Prize and the Sakharov Prize, and is the UN’s first Goodwill Ambassador for the Dignity of Survivors of Human Trafficking. Together with Yazda, a Yazidi rights organization, she is currently working to bring the Islamic State before the International Criminal Court on charges of genocide and crimes against humanity. She is also the founder of Nadia’s Initiative, a program dedicated to helping survivors of genocide and human trafficking to heal and rebuild their communities.

A very well written review that gives readers an idea of the ordeal of being persecuted by the ISIS.

Thank you! This is one of the most heart-breaking books I’ve read so far.