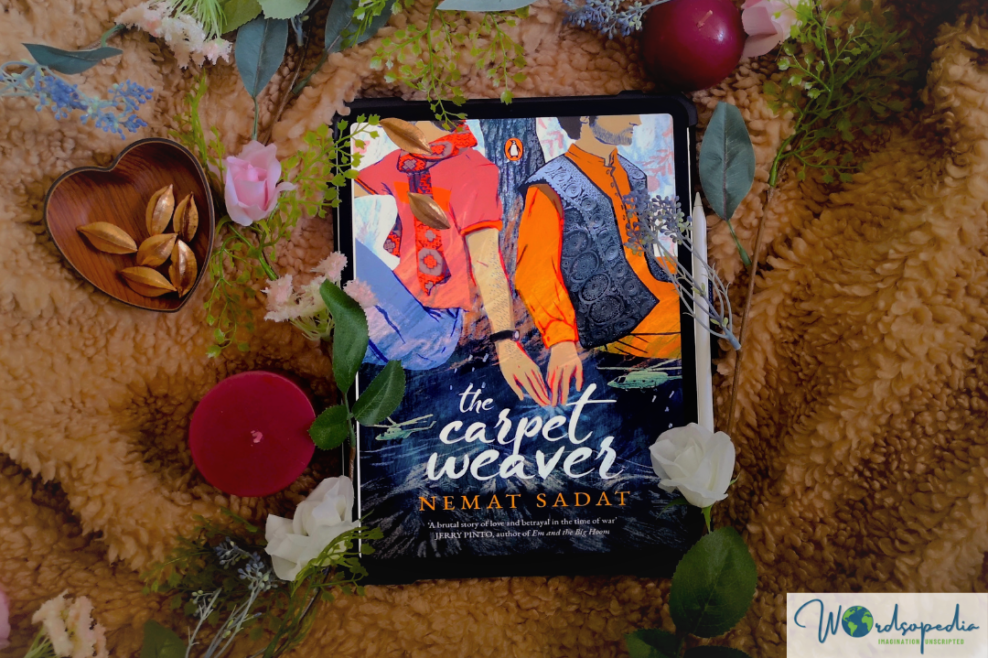 To love and be loved is every human’s greatest desire. But what happens when one is not free to love? The Carpet Weaver by Nemat Sadat is one such love story, but at the same time, it is much more than a regular love story. It’s a story of grit, determination, and survival amidst war. It is also the tale of forbidden love, and the coming out story of a young man. And above all, it’s a masterpiece to cherish forever!

Set in Afghanistan in the 1970s, the story revolves around the lives of three boys and their families—Kanishka, Faiz, and Maihan.

Kanishka Nurzada, the son of a carpet weaver, is the main protagonist and narrator. He aspires to join his family business, much against his father’s wishes, who has bigger dreams and aspirations for his son. He is leading a dual life, hiding his identity from the world. Revealing his identity would be a danger not only to him, but to his family as well. He is Kuni (gay) and in Afghanistan, homosexuality is a crime.

The story traces Kanishka’s life across three timelines, and three locations–Kabul, Pakistan, and finally America. Every phase reveals the intricacies of Kanishka’s life. It’s a story filled with hope, as in the end, Kanishka is victorious after all the sufferings he has undergone.

The first part set in Afghanistan is a period of political uncertainty, where the 16-year-old is exploring his sexual identity. In the second phase, we find Kanishka amidst a political turmoil that pierces his family. Attempting to flee the country, Kanishka and his family end up in a prison camp in Pakistan. Their hopes dwindle as life in the camp is difficult and dangerous. His talents as a carpet weaver give him strength and hope. It’s finally in the promised lands of America that Kanishka learns to dream, accepts his identity, and learns to live his life.

Despite losing his home, his country, and everything dear to him; Kanishka comes out as a strong protagonist, never losing his resolve to fight and protect his mother and sister.

It’s a remarkable debut for the plot, and the narrative is deeply engaging. The author’s descriptive style of writing brings the words to life as one can visualize not only the rugged trails but also feel the trials and tribulations the characters undergo.

Sadat’s writing is truly magnificent, and he brings to fore the traditional, orthodox yet hypocritical Afghan society in an extremely hard-hitting yet honest manner in The Carpet Weaver.

Nemat Sadat is a novelist, journalist, and activist, known for his debut novel The Carpet Weaver and his campaigning for LGBTQIA rights, particularly in the context of Muslim communities. Sadat is one of the first Afghans to have openly come out as gay and to campaign for gender freedom and sexual liberty.

Home of the Floating Lily

[…] is Gay, Lesbian or Queer. Young didn’t touch my heart the way Kanishka Nurzada in Nemat Sadat’s Carpet Weaver or Fatima from Six Metres of Pavement by Farzana Doctor […]