The Liberation of Sita 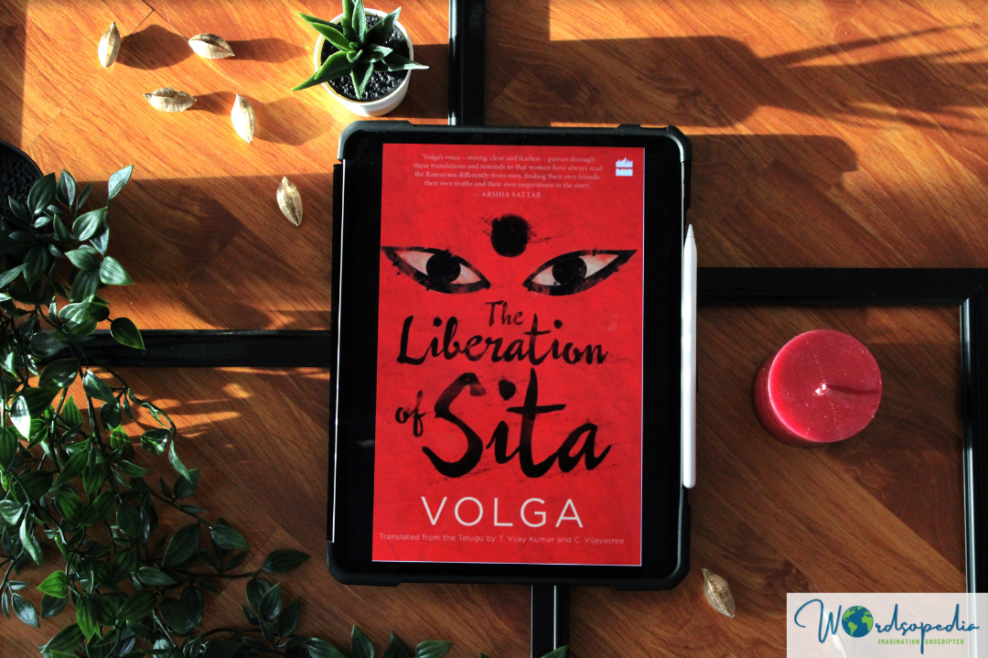 The Liberation of Sita by Volga is a retelling of Valmiki’s Ramayana. This is a collection of five short stories narrated from Sita’s point of view. The stories are independent of each other, but all of them have Sita as the central character.

In this retelling, Sita meets Surpanakha, Ahalya, Renuka Devi, and Urmila. Though in the original epic, they are minor characters, and have no voice; Volga is giving them the opportunity to share their thoughts with the rest of the world.

Sita’s interactions with other women make her reflect upon her life, and ask questions which she had never thought of before. The characters she meets offer a unique perspective to dharma, society and behavior. The first four chapters give voice to Sita, while the last one has Rama as the narrator.

The Reunion is an emotional narration of Sita’s chance encounter with Surpanakha. Volga is stepping away from showing them as envious or scornful women. It is the story of friendship and sisterly affection between a mutilated woman and an abandoned woman. Surpanakha’s transformation and journey of self-exploration is inspiring.

Music of the Earth tugged at my heart. As Sita undertakes a test to prove her chastity, she remembers her conversations with Ahalya, who had advised her long ago to never agree to a trial. In Volga’s interpretation, Ahalya is shown as a strong woman who does not seek approval or validity from others.

The Sand Pot was a revelation to me, as I wasn’t aware of the story of Renuka Devi, Parasurama’s mother. Volga has once again interpreted the story powerfully. Renuka Devi’s questions and her discussions with Sita are profound and make one question the patriarchy which surrounds us.

The Liberated revolves around Urmila. After Lakshmana departs for the forest, she spends her life in isolation in her room. Though in the original epic, her woes and tears are hardly mentioned; Volga has looked deep inside Urmila’s heart and given a voice to her bottled-up emotions.

The Shackled depicts Rama’s agony as he leads a life of suffering and loneliness. His life and destiny are in the hands of his duty. Bound to follow Arya Dharma, there is no liberation for him.

Originally written in Telugu as Vimukta, this is a translated version. This is an interesting read, however in certain places it feels disconnected and the essence is diluted.

Sita’s character undergoes profound changes through the stories. Volga shows how her interactions with all these women play a part in her learning, growth and ultimately her liberation. It was refreshing to see the women free themselves from the societal norms, expectations and be truly liberated.

The Liberation of Sita is a wonderful narrative, encouraging us to question patriarchy, and liberates us of many false notions and shackles which bind us. It teaches us to forge faith in sisterhood to seek emancipation. It gives voice to women who were rendered to the sidelines in the original epic.

Popuri Lalita Kumari, popularly known by her pen name Volga, is Telugu poet and writer well known for her feminist perspective. She was born in Guntur, Andhra Pradesh, India. She won the prestigious Sahitya Akademi Award in 2015 for her short story compilation ‘Vimukta Kadha Samputi’ in Telugu.