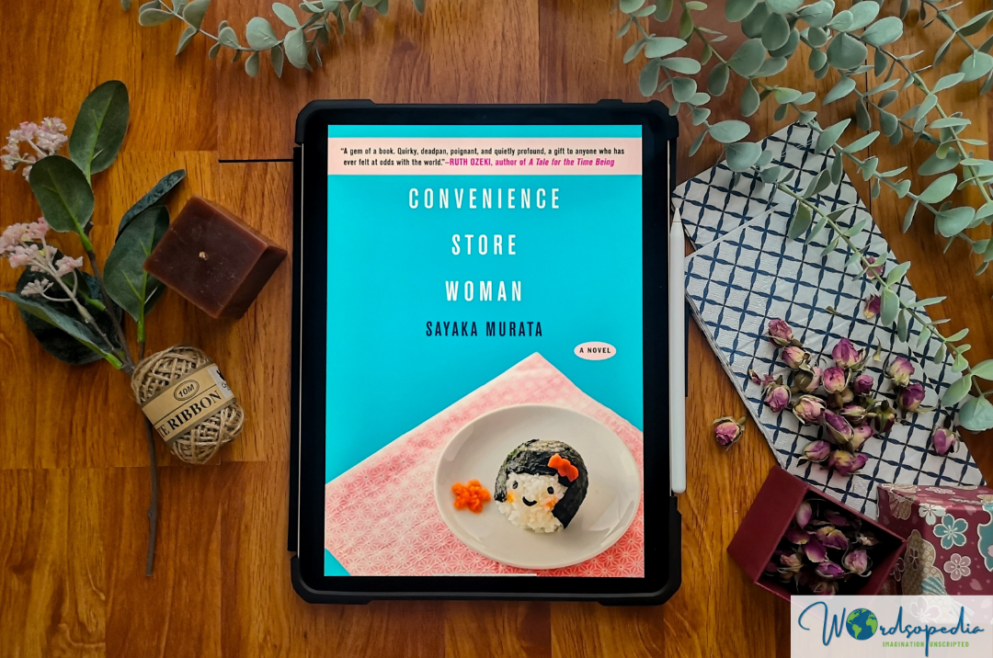 Convenience Store Woman is a refreshing story by Japanese novelist Sayaka Murata. This is the first of her works to be translated into English. Inspired by her own experiences as a part-time convenience store employee, Murata has penned this story of a 36-year-old single Japanese woman, Keiko Furukara, a ‘misfit.’

Keiko, who has always felt out of place in society, is ‘at home’ in the ‘Hirmoachi Station Smile Mart’–a convenience store in Tokyo. She has spent 18 years of her life at the same place–greeting customers, stocking shelves and managing the cash register. There is a structure in her daily routine, which she finds comforting. Her world revolves around the convenience store, and she thinks of it even when she is not at work. For her, the store is not just a job. It’s her life.

At that moment, for the first time ever, I felt I’d become a part in the machine of society. I’ve been reborn, I thought. That day, I actually became a normal cog in society.

Her family and friends feel she is stuck in the same job, and her abstinence from leading an active sexual life puts her under constant scrutiny. But despite what they think, Keiko is content and happy with her life.

Right from her childhood, Keiko thinks ‘differently’ and reacts to situations in a ‘strange’ manner. Her behaviour alienates her from society and alarms her parents. Her younger sister loves her abundantly and constantly worries about Keiko.

Will you ever be cured, Keiko? How can we make normal?

To fit in with society’s norms, Keiko adopts a defense mechanism of copying her co-worker’s mannerisms, reactions, and gestures. She even adopts their voice modulations and speech patterns. This masked behaviour, however, seems to be a relief to her family and friends.

The entry of Shirahara, a convenience store worker, presents an opportunity for Keiko to end the unwanted scrutiny in her life. He is a societal misfit like her. He holds misogynist views of society and the position of women in it. Keiko and Shirahara agree to live together – a mutually beneficial relationship. Keiko, however, is unable to treat her live-in partner as anything more than a ‘pet’ who needs regular ‘feed.’

She’s far happier thinking her sister is normal, even if she has a lot of problems, than she is having an abnormal sister for whom everything is fine.

The fake relationship, though celebrated by society, teaches Keiko an important lesson. She sees herself for she really is and accepts it with a renewed confidence.

What I liked most in the novel is the diverse representation. This is probably the first novel I’ve read which portrays a potentially autistic woman as the main protagonist. Though the author hasn’t explicitly mentioned Keiko as autistic, her idiosyncratic behaviour, thought process, emotional disconnect and struggles to fit in are quite indicative. Keiko’s interpretations from early childhood depict her ‘difference.’ She is repeatedly told by all that she needs to be ‘fixed.’

Instead of just focusing on the protagonist’s troubled personality, Murata addresses the issues affecting Japanese society – the pressure to conform to societal norms, decreasing marriage rate, declining child birth and labour shortage. She highlights the human need to rationalise things we don’t understand:

When something was strange, everyone thought they had the right to come stomping in all over your life to figure out why.

Murata sensitizes the readers to the price of nonconformity in society for both men and women, particularly with regard to gender roles, parenthood, and sex. Societal acceptance of sexlessness, voluntary and involuntary celibacy, especially within marriage, are brought out forthrightly.

That’s right, why don’t you just find someone? It doesn’t really matter who it is, after all. Women have it easy in that sense. It’d be disastrous if you were a man, though.

It’s impossible to not fall in love with Keiko, a woman who thinks of herself as a convenience store animal.

Convenience Store Woman is sure to make the readers question the societal definition of ‘normal.’

Sayaka Murata is a Japanese writer. She has won the Gunzo Prize for New Writers, the Mishima Yukio Prize, the Noma Literary New Face Prize, and the Akutagawa Prize.

[…] character sketch reminded me of Keiko from Sayaka Murata’s Convenience Store Woman. Usami portrays her with a lot of compassion and […]