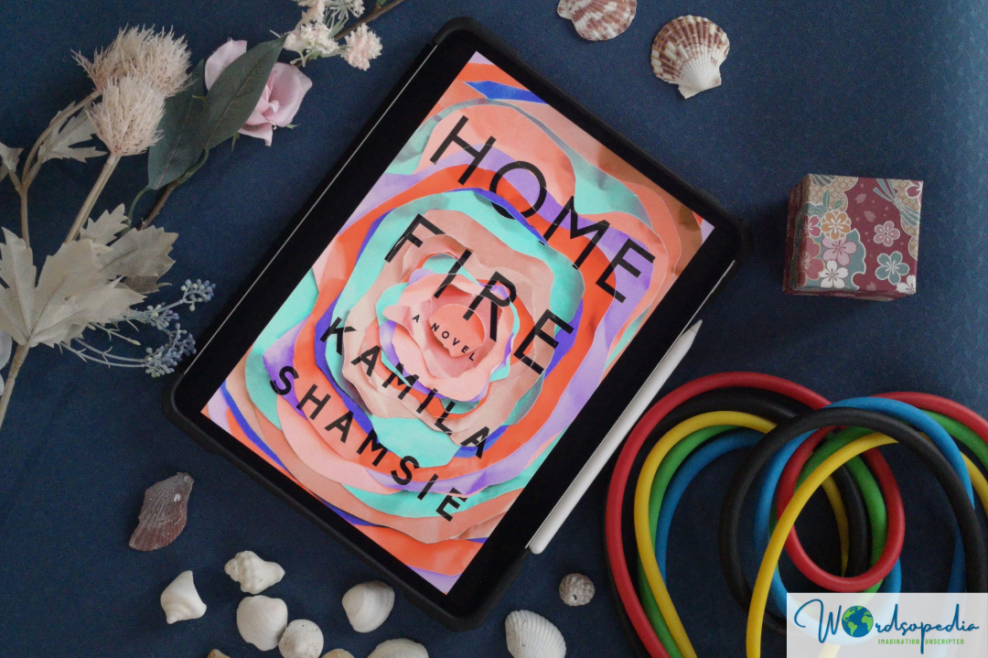 Home Fire by Kamila Shamsie is a tragic and beautiful retelling of the Greek Classic Antigone. Set in current times, it is a topical read addressing the merger of the personal and political lives and its impact on the lives of people.

Primarily set in London (bits of it in US, Syria and Pakistan), the novel revolves around two Pakistani British families–Pashas and Lones. Except for their origin, there is no commonality between the two. Pashas are religious and conservative, while the Lones are a political modern family.

Isma Pasha, the eldest daughter, becomes a de facto mother to her siblings–Aneeka and Parvaiz, after the demise of their mother. Their father, Adil Pasha a Jihadist, has been a missing figure for long, and his death has scarred the family – they are overcautious and ensure to arouse no suspicion on their loyalties towards the country of their birth.

Karamat Lone, UK’s first Muslim Home Secretary, is an anti-terrorism crusader. Raised as a Muslim, but a self-proclaimed atheist, he places more importance on his national duty than religion. He comes across as being prejudiced towards his fellow Muslims and will do anything to “fit in.” His son Eammon’s path crosses with the Pasha sisters and makes him question his father’s political beliefs. His loyalty is put to test as he is split between love and his duty towards his father.

Isma, Aneeka, Parvaiz–the Pasha siblings are all so different from each other. Isma is cautious, sensible and silent. Aneeka is brazenly bold and witty, but hides her true feelings underneath an invisible mask. Parvaiz, a young man who is seeking a father figure, falls off the wagon and is radicalized by an ISIS recruiter. The bond between the siblings, especially between the twins, holds the story together and leads it to its moving end.

9/11 affected the way the world started viewing Muslims. The novel opens up with a scene which depicts the cautious approach of the West towards Muslims. The author highlights the racism and prejudices prevalent in the world.

Shamsie switches the points of view between the main characters, and has narrated the entire story as sections revolving around a particular character. This approach works well as the author brings forth an in-depth view of family members–their thoughts, struggles, pains and dilemmas. I liked the seamless transition and introduction of the character’s voices one after the other. As a reader, I was involved and invested all throughout.

The best part of the novel is her writing. It is musical and beautiful. She has absolute control over the narration. Though the story starts slow, it picks up pace and gets intriguing. It is unrushed, and the author ensures the reader feels the characters’ emotions.

Shamsie deals with various interesting threads–family, love, religion, racism and terrorism. Citizenship, life of immigrants, identity and loyalty are the issues the author has highlighted in a poignant and thought-provoking manner.

The climax is the highlight of this story. It is dramatic, volatile and gut-wrenching. I definitely did not see that coming.

“For girls, becoming women was inevitability; for boys, becoming men was ambition.”

“Everything else you can live around, but not death. Death you have to live through.”

“ Cancer or Islam—which is the greater affliction?”

Home Fire is a well-constructed and powerful story of complex relationships, second chances, and the quest for justice and salvation.

Kamila Shamsie FRSL is a Pakistani and British writer and novelist, known for her award-winning novel Home Fire.