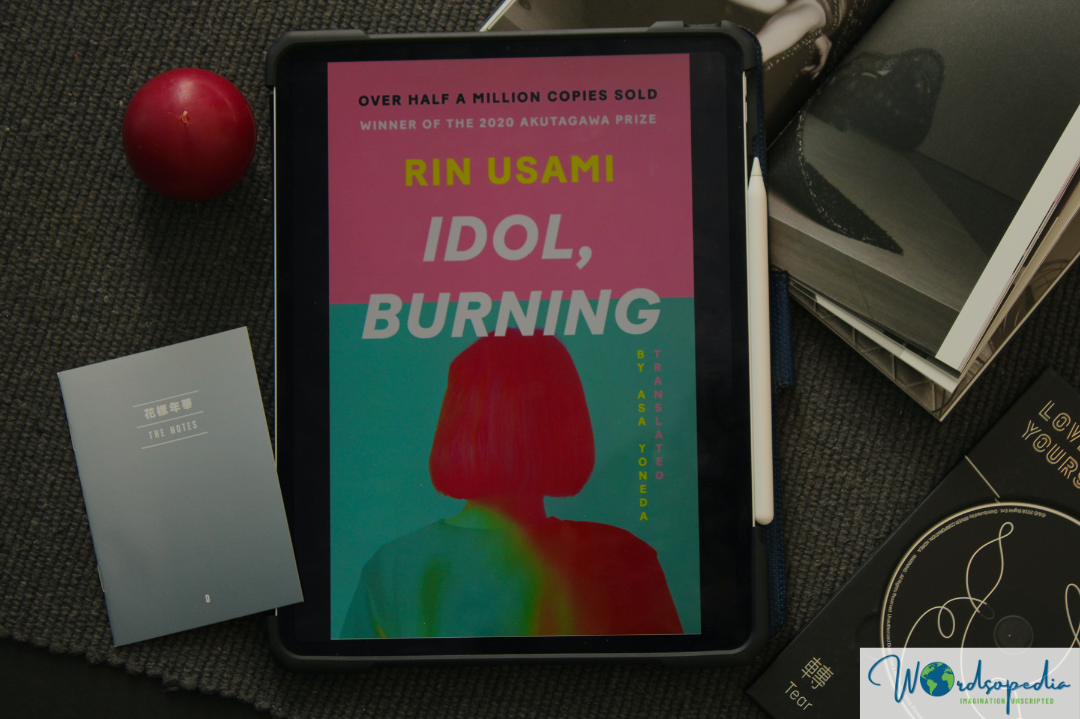 Rin Usami’s novella, Idol, Burning is a fine balance of fame, obsession, heartbreak, disillusion and adulation. Revolving around the extremely toxic fandom prevalent in Japanese Pop industry, Usami explores the influence of idols, idol worship, the impact of social media on the lives of today’s teens and youngsters, and the associated heartbreak when an idol falls from a high pedestal.

Originally written in Japanese, the translation is by Asa Yoneda. Manga artist Leslie Hung has created perfectly suited illustrations. They capture the essence of Akari’s feelings.

Akari, a high school student with an unnamed learning disability, is obsessed with Masaki Ueno, a member of the popular J-Pop group Maza Maza. He is her “oshi,” or idol. She has dedicated her life to him, transcribing everything he has ever said on TV or radio. She analyses his statements and shares her views on her blog, which is dedicated to her Oshi. But her obsession is not carnal. She is happy admiring him from a distance and does not dream of a physical closeness. Akari works part time and uses up her entire salary to pay for Masaki merch or concerts. Whenever a new single comes out, she buys multiple boxes just to boost Masaki’s popularity ranking within the group.

Even though she is socially awkward and struggles to make friends in real life, her online persona is the complete opposite. In the online world, she is part of a community where they love discussing their favourite hero, sharing pictures, and commenting till the wee hours.

However, cracks start developing in her Oshi-centered world when allegations surface of Masaki assaulting a female. Akari feels lost, cheated, and abandoned as one after the other details are revealed. The idol she has adored is stripped down to reveal a real and flawed person. She clings to Misaki, spending her time and money on supporting Masaki through the crisis. Eventually, her downfall begins, and she has no option but to come to terms with the reality.

Akari’s character sketch reminded me of Keiko from Sayaka Murata’s Convenience Store Woman. Usami portrays her with a lot of compassion and warmth.

She lives fantasizing about her idol and remains oblivious to the turmoil and despair both her mother and sister undergo. However, their behaviour and attitude towards Akari leave one with a lot to ponder upon. Both mother and sister are important characters and lend strength to the narrative.

The novel is in first person POV, and it helps us to see the events unfolding through Akari. But the readers are not stuck in her head. Usami gives the readers the freedom and scope to analyse and interpret the events and people from their perspective, too.

It’s a short novella, so there isn’t much scope for detailed plot development. The remarkable ending is optimistic and symbolic in depiction.

Usami’s depiction of stan culture, and the related obsession, is bang-on-point and feels authentic. She has covered fandom from both ends of the spectrum. Apart from exploring the crazy obsession of fans, Usami also examines the loneliness in the idol’s life. These aspects make the novel more real and relatable.

The narration feels deeply personal and touches a chord. When I read the acknowledgment section, I understood the author has drawn inspiration from her brother’s life, his struggle with the Japanese education system, and her attitude towards him.

Idol, Burning is heart-breaking, yet hopeful.

Rin Usami (b. 1999) was born in Shizuoka Prefecture, Japan. Usami began writing novels in high school. Her debut novel Kaka, published in 2019, received the Yukio Mishima Prize, making her the youngest recipient in the award’s history. In 2020, at the age of 21, Usami won the prestigious Akutagawa Prize for Idol, Burning. She lives in Tokyo.

How To Kill Men and Get Away With It