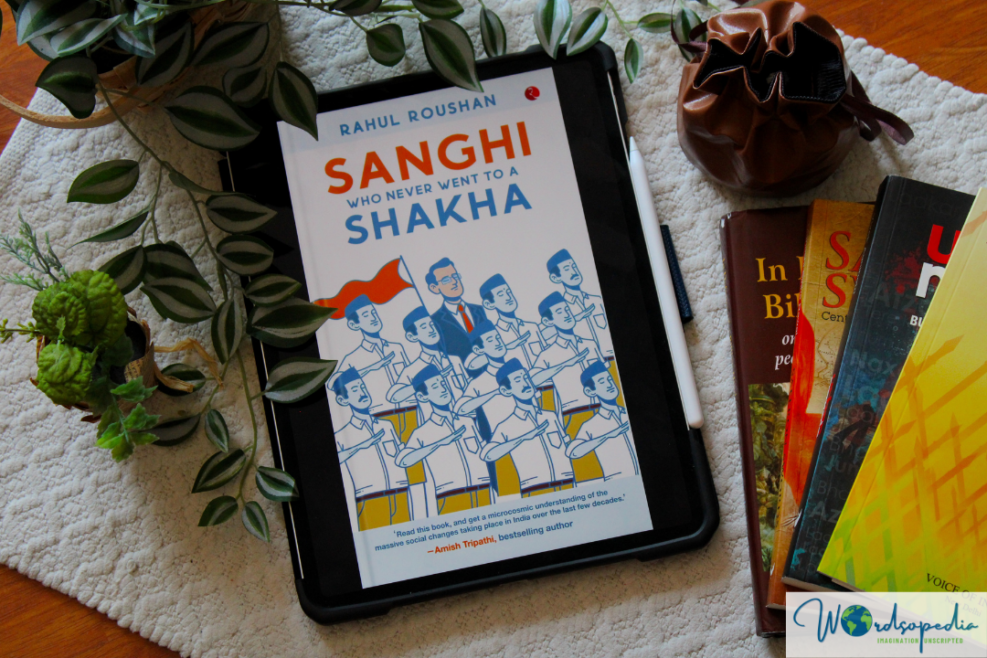 Sanghi Who Never Went To A Shakha is author Rahul Roushan’s ideological journey from a ‘Congressi Hindu’ to a ‘Libertarian’ to finally an assertive Hindu or ‘Sanghi’ without having joined RSS or attending the shakhas.

Evocatively written, this is not just Roushan’s story, it’s the story of many Indians who are witnessing the socio-political change. He provides a good understanding of the changing India and exposes the hollowness of Indian politics. The author won my respect and admiration for his extensive research and detailed references.

This book brings us face to face with a reality which has been ignored for long. Secularism cannot be a one-way street forever.

Rahul Roushan’s early life was like of many middle-class children growing up in the 80s and 90s. Brought up in a secular Hindu family in Patna and Bihar Sharif, the author’s family believed in all religions. They celebrated Hindu festivals and also read books on Islam and had a statue of Christ in their living room. His father and grandfather were hardcore ‘Congressis.’

In 2001, the mathematics graduate moved to Delhi to pursue broadcast journalism at Indian Institute of Mass Communication. The cultural shift, difference in diction and life in a metro city proves to be an enriching experience. His internship days at Aaj Tak coincide with the Godhra carnage, where he learnt the “unwritten rule or moral compass of the Indian mainstream media.” He shares instances of how vested powers create social unrest to suit their personal motives. How the respective reporters or editors shaped by their ideologies use the caste and religion divide to build on the oppressor-oppressed narrative.

He admits to having toed the same line and played a part in keeping the particular narrative alive, how he created a fake-story and received rewards for the same. But it is only later he realizes his folly.

I had essentially helped create a fake Hindu–Muslim harmony story, similar to the various stories I had grown up hearing. This is how a particular narrative is kept alive. You don’t even realize that you become an active player in keeping this narrative alive. The story was aired multiple times on the TV channel. It was a script I had written and it had my voice-over too. Again, I received rewards that come naturally when you toe a particular line. That’s how the system itself is designed to perpetuate a particular narrative.”

He doesn’t mince words when he highlights the ‘lying for harmony’ practiced by many politicians to maintain harmony.

There are sufficient examples in the book exploring this ‘political narrative’ further. One of them is the interview given by Sharad Pawar in 2006 about the 1993 Mumbai Bomb Blasts when he was Chief Minister of Maharashtra, where he admitted that

he lied about an extra bomb so that the communal harmony might not be disturbed.

Roushan also mentions the history textbooks which have whitewashed the atrocities by Muslim invaders. He quotes a circular issued in 1989 by the West Bengal Secondary Board of Education,

Muslim rule should never attract any criticism. Destruction of temples by Muslim rulers and invaders should not be mentioned.”

The narration moves on to his days as a post-grad student at IIM-A, and how it affected his perception of Gujarat and makes him question his beliefs. But he continued to be a ‘Libertarian.’

In the following chapters, he discusses the role of politicians, the Congress-Left ecosystem, 2G scam, Radia tapes, hate crimes and JNU protests. He explores in-depth the manipulations and unethical propaganda by the mainstream media, the rise of Modi, rising intolerance and award-wapsi protests. He concludes his memoir by talking about his allegiance to Hindutva and transition to a ‘Sanghi’–a term he was scared of once!

I am usually not fond of political books as they are almost always quite serious and dry. However, Roushan’s sarcastic humour, witty and stinging one-liners set an interesting tone. Also, the way he has employed the ‘stream of consciousness’ in his writing gave me the experiencing of having lived through the narrative.

Roushan’s memoir is brutal, honest and hard-hitting. Not everybody would agree with the author’s viewpoints, but regardless of that, I feel all Indians–irrespective of caste, religion or political ideologies should read this book.

Sanghi Who Never Went To A Shakha is a wonderful read, and I would read it again, and again.

If I have to describe this book in one word, I would say “Unputdownable!”

Couple of excerpts from the book –

Often, more than the parents, it is the educational system and the mass media that raise the children.

The right of running educational institutions aimed at preserving one’s religious traditions and faith is available to only to non-Hindus, as per Article 30 of the Indian Constitution.

Highlighting and shouting about caste is seen as fighting for justice, while hiding and keeping mum about religion is seen as indulging in responsible behaviour, except of course when the perpetrator is Hindu and the victim a Muslim.

Further, Hinduphobia has been normalized and intellectualized to frightening levels, where a Hindu talking about any injustice against him is branded a bigot. Anything that celebrates or propagates Hinduism will increasingly be argued as being detrimental to creating ‘safe spaces’.

The liberals don’t realize that in their extreme hatred for Modi and Hindutva politics, they have started hating the people, and even the state on occasions.

An entrepreneur, a media professional, a political commentator, and a writer. Rahul Roushan has founded at least three websites, including Faking News, which was India’s most popular news satire website. He is currently the CEO of OpIndia digital publications, earlier having worked with Swarajya magazine and Newtwork18. Rahul Roushan holds a degree in mathematics from Patna University, a PG Diploma in journalism from IIMC, New Delhi, and an MBA from IIM, Ahmedabad.