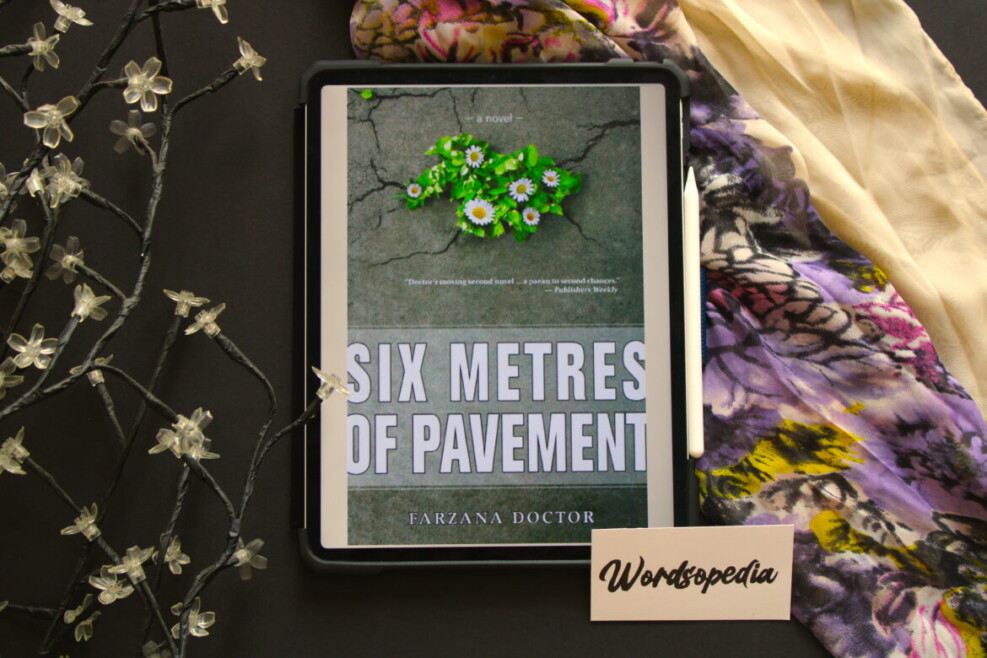 ‘Six Metres of Pavement’ by Farzana Doctor is a heart-warming story of strangers brought together by fate—the one common thread between them being sadness. The story seamlessly blends love, loss, despair, and sexuality with a generous hint of realism. The characters are real and speak to the readers with effortless ease.

Has the feeling of guilt ever gnawed at you? How long can one live with the guilt? And when do memories stop haunting? These questions plagued and gored every inch of me as I lost myself in the pages. Imagine drowning in guilt for such a long time that it becomes a part of you and every waking moment of your life. Yes, that’s Ismail Boxwala, the 50-year-old Indian protagonist of this story. An overlook that leaves him heartbroken, shattered, and guilty. The mistake causes him a precious part of his being—he ends up childless and divorced.

“Why hadn’t I looked over my shoulder when I parked?… Why didn’t just one worrisome, sentimental, fatherly thought about my baby enter my thick skull at some point during that day?”

The story moves forward and takes a definite shape with the introduction of Celia and Fatima.

Celia, a Portuguese widow, grieving the loss of her husband and mother, is the picture of full-blown grief, a suitably dressed woman in mourning. Circumstances force her to leave her home and move in with her married daughter. How long should a widow mourn? When is the right time to shed the claim of black? Left with nothing much to do but to take care of her grandson Marco, and the garden, Celia spends most of her moments dreaming of José until fate smiles on her.

Fatima, a young queer Indian woman living with her conservative parents, finds herself in a quandary. Her sexual identity and preferences, which had been hidden from them for long, are brought out in the open; that revelation brings with it a heavy price. A chance encounter with Ismail in a writing workshop leads to a relationship where he not only becomes a friend and a trusted guide but also becomes a bridge connecting her with her estranged family.

Ismail’s friendship with Celia and Fatima opens new doors for them, as they all realize despite all the pain and suffering, they all should move forward in their lives.

“Just like the changes they’d witnessed from within 82 Lochrie, Ismail and Celia would know that everything outside and around them was in motion, too. With each moment, something was changing, stretching, growing. Lives were beginning, and others were ending. The movement might be minute, perhaps imperceptible to the naked eye, but certainly, definitely, real.”

Ismail finally faces the fact that both his life and house — which had been an empty shell for a long — are now overflowed with companionship and happiness. After all, life is all about second chances, isn’t it?

The story flips back and forth in time, along with the narrative, which changes from one character to another, making it an intriguing and engaging read, as one can ponder on the varied characters—their struggles and joys.

I strongly recommend Six Metres of Pavement, and it occupies the top shelf in the ‘to re-read’ pile.

Farzana Doctor’s first novel, Stealing Nasreen, received critical acclaim upon its release in 2007. Her second book, Six Metres of Pavement, was named one of Now Magazine’s Top Ten Books of 2011. It also won the Lambda Literary (2012) and was short-listed for the Toronto Book Award (2012). Farzana was named as one of CBC Books’ “Ten Canadian Women Writers You Need to Read Now” and was the recipient of the Writers’ Trust of Canada’s Dayne Ogilvie Grant (2011).

Besides novels, Doctor also writes poetry and has written on social work and diversity-related topics. She provides private practice consulting and psychotherapy services. She lives in Toronto, where she is co-curator of the Brockton Writers Series.

Tea With A Drop Of Honey

Women vs We Men