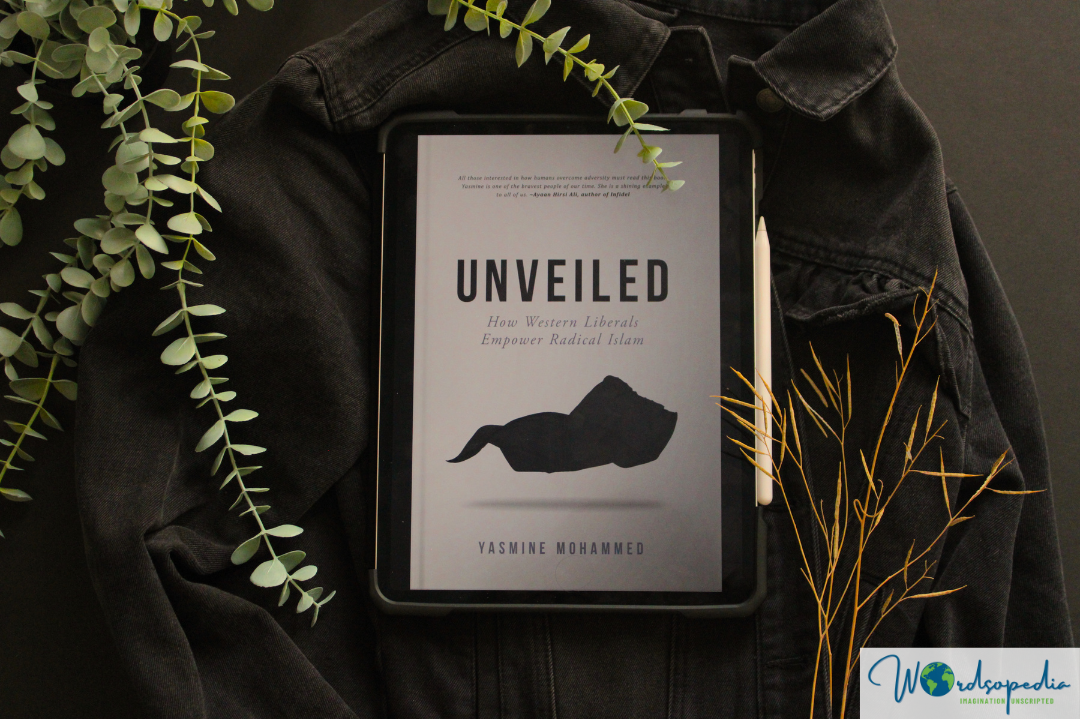 Often a reader goes in search of a book, and then there are those rare instances when a book finds the reader. This is one of such instances when this book found me! I was aimlessly scrolling on Twitter when I chanced upon a name, Yasmine Mohammed, and for reasons unknown, I was curious about her. Mohammed is an ex-Muslim Canadian university instructor, author, human rights activist, and an advocate for women’s rights through her non-profit organization Free Hearts, Free Minds. She supports closeted ex-Muslims from Muslim-majority countries and coordinates an online campaign called #NoHijabDay against #WorldHijabDay. Unveiled: How Western Liberals Empower Radical Islam, her debut work, is a harrowing and courageous narrative of her traumatic life.

“Quite often I hear people wonder what’s the big deal if you have to wear a scarf on your head? The big deal is that women are not even allowed agency over their own bodies! Hijab is just the tip of the iceberg. It is the physical representation of the subjugation and dehumanization and absolute gender apartheid that is commonplace in many parts of the Muslim-majority world.”

This memoir is both personal and political. It is not the story of the survival of one person. She shares grisly incidents of honour violence and honour killings common in Muslim communities across the world, not only from Muslim-majority countries, even in places like Texas and New York. This book is the voice of oppressed women and children denied the opportunity to live a free life.

Born to an Egyptian mother and a Palestinian father in Canada, she grows up in a violent and dysfunctional family. Mohammed is a curious child who likes to ask questions about Islam, Quran, and religious practices. Unfortunately, her mother discourages her natural questioning and critical thinking; believing it to be shaytan’s work.

“There was always some sort of coercion going on. I was forced to pray, to memorize Quran, to promise to kill my friends, and of course to wear this hideous hijab. Every conceivable method of coercion was deployed—fear, a desire to please Allah, emotional blackmail. It was all unending. Only obedient Muslim daughters can go to Heaven. If you dress like the kuffar, you are choosing hell. That is the self-hate that I was filled with from the age of nine.”

Her step-father, an Islamic fundamentalist, resorts to violence, beating the bottoms of her feet for not reciting her prayers correctly. Reading about her mother’s toxic, manipulative and unbalanced behaviour was gut-curdling. My heart bled for Mohammed as she spent her whole life craving for her mother’s affection.

“According to Hadith, the record of sayings and actions by Muhammad, he said, “Teach your children to pray when they are seven years old, and smack them if they do not do so when they are ten.” (classed as saheeh by Shaykh al-Albaani in Saheeh al-Jaami , 5868) He also said, “Hang your whip where members of your household (your children, wife, and slaves) can see it, for that will discipline them.” (said by al-Albaani in Saheeh al-Jaami , 4022)”

In this memoir, the author shares details of her traumatic upbringing, a forced marriage to an Al-Qaeda operative, her escape, subsequent activism, and her finally her journey to a disbeliever and the disconnect from religion.

“Quran 5:51 says “O believers, take not Jews and Christians as friends; they are friends of each other. Whoso of you makes them his friends is one of them. God guides not the people of the evildoers.”

The author poses legitimate questions and blames the Western world for duplicity. She questions the human rights activists and Western Liberals for their silence and accuses them of duplicity. While on one hand, they demand women to “free the nipple,” on the other, simultaneously encouraging subjugation of women from the East.

“How can we fight Western patriarchy while simultaneously supporting Islamic patriarchy? I hope this book has dispelled all the myths and confusion that lead to such hypocritical and dangerous disconnects. People in Muslim majority countries are just trying to progress their culture in the same way Western culture have. You have been able to abolish slavery. You have been able to fight for women’s equality. We just want to do the same. Why is it that when we try to progress, suddenly it’s a bad thing? We get called Islamophobic for criticizing Sharia and pushing for change. Why should we have to retain our misogynist, homophobic cultures?”

I would have easily given this book 5 stars, but refrained from it because of the byline and writing.

The by-line of the book is slightly misleading. The author has not engaged in enough discussion to substantiate the claim, apart from a few snippets and statistics (last chapter). Though she highlights the attitude and indifference of Canadian authorities to her abuse in her mother’s home and turning a blind eye to the disregard of polygamy laws by Muslims, the insufficient data does not encourage meaningful discussion and a social commentary suited to the byline.

The writing is not perfect; the disjointed and repetitive parts could have benefited from better editing. But I would easily overlook these, for I could feel the author’s raw emotions and pain. Her words are powerful enough to make one aware of the repression millions of women are facing, and the lack of open support due to fear of being seen as Islamophobic, racist, or culturally insensitive.

Unveiled: How Western Liberals Empower Radical Islam is a traumatic but important book to read. It would remind you of Tara Westover’s Educated.

It is a true story of a person’s triumph from radical Islam. Read this book for the author’s courage, grit, and determination; and not to understand the relationship between Western Liberals and Radical Islam.

An excerpt that perfectly summarizes the author’s harrowing life journey:

If you are caged long enough, freedom feels weird, unfamiliar, and uncomfortable.

Human rights campaigner, Yasmine Mohammed, advocates for the rights of women living within Muslim majority countries, as well as those who struggle under religious fundamentalism in general. She is the founder of Free Hearts Free Minds, an organization that provides mental health support for members of the LGBT community and freethinkers living within Muslim majority countries- where both ‘crimes’ can be punished by execution.

Is E-Commerce the way ahead for MSME?