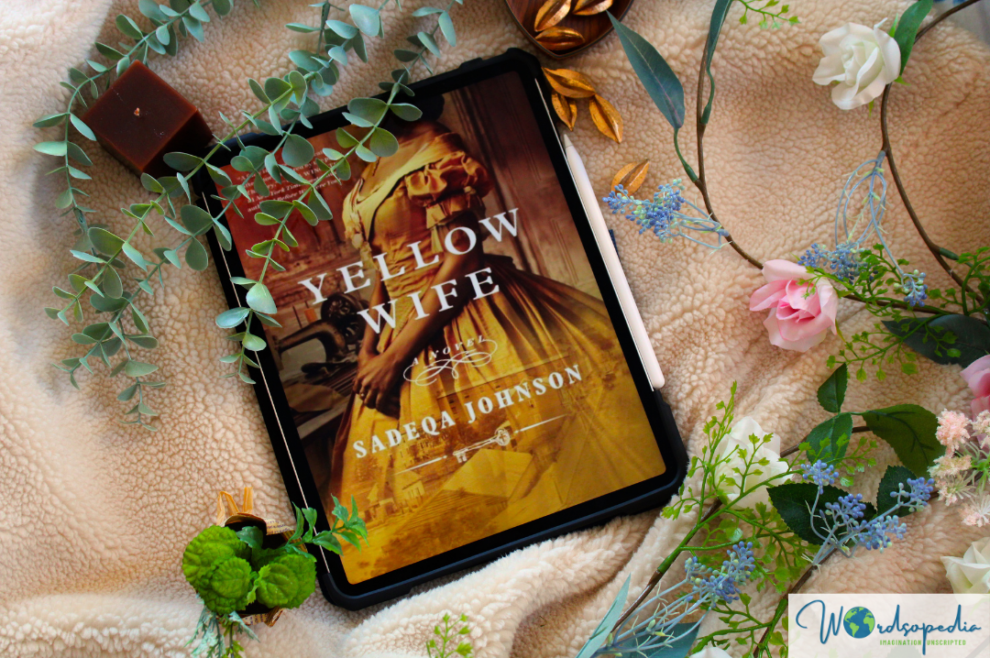 Yellow Wife by Sadeqa Johnson is a poignant, beautifully written African-American Historical fiction. It’s an intense read which sheds light on the lives of slaves, especially women who underwent great ordeals for the sake of their children.

The life of Mary Lumpkin and Lumpkin’s jail in Richmond, Virginia, is the inspiration behind this story.

The book starts in Charles City, Virginia, where Pheby Delores Brown, the narrator and her mother Ruth live as slaves in Bell Plantation. Jacob Bell, the American owner, is her progenitor. Even though she is a slave, she is leading a sheltered life in the household. Bells’s sister teaches her to read and play the piano; despite it being against the law. Promised to be freed from slavery on attaining the age of 18, Phebe and Ruth are hopeful of a bright and free future. She is in love with Essex, a slave like her. With her help, Essex escapes from the plantation with the promise of meeting Phebe in Massachusetts; for Jacob has assured he will get Phebe admitted in a girl’s school.

Jacob’s wife Delphina does not take kindly to Phebe and sells her off to a slave trader while Jacob is away. The trader takes her to Lapier Jail, a holding place for slaves until auctioned. Upon arriving in the jail, Rubin Lapier, the jailer claims her for himself; despite knowing she is carrying another man’s child. Phebe becomes his ‘yellow wife,’ but in reality, she is more of a sex slave. She bears him 5 children and takes care of running the household. She silently submits to his cruel treatments, intending to keep her children safe. Her life changes when Essex is captured, and is brought to the same prison.

Narrated from Phebe’s point of view, Yellow Wife is a moving, and terrifying story of the sufferings inflicted by the institution of slavery. The horrendous treatment meted out to the slaves by the rich White Americans is described in great detail and is quite graphic; but it makes the narrative all the more intriguing and heart-breaking. The scenes are so evocative, especially the ones in the jail; I felt I was in the pages and was not just a reader.

Jackson’s writing is well researched, fast-paced, and honest. She is immensely talented and brings the characters to life. Pheby and Ruth are strong, praise-worthy, remarkable women who don’t give in to despair, regardless of however challenging their situation is. Lapier is a despicable guy, mean and heartless to core. Even the minor characters; their turmoil, anguish, fears and sufferings are equally well described and they speak to the reader in all honesty. The diction is simple and lends authenticity to the narration.

The book ends on a positive note, but I just wished Johnson had shed more light on it, and dedicated a couple more pages to Phebe’s new life. It’s not a reflection on her writing, but just my desire to keep reading!

This is my first-time reading Johnson’s work, but I have become an ardent fan.

Yellow Wife is a phenomenal read, and no fans of Historical Fiction should miss out on this.

Sadeqa Johnson, a former public relations manager, spent several years working with well-known authors such as JK Rowling, Bebe Moore Campbell, Amy Tan and Bishop TD Jakes before becoming an author herself. Her debut novel, Love in a Carry-on Bag, is the recipient of the 2013 Phillis Wheatley award for best fiction, OOSA best book award, and USA best book award for African-American fiction. Second House from the Corner, was hailed by Essence magazine and a Go on Girl! Bookclub selection for 2017. And Then There Was Me, won the National Book Club Conference fiction book of the year award, and was a finalist for the Phillis Wheatley award. She has also received the Black Pearl Magazine Author of the Year award for 2017.

Johnson is a Kimbilo Fellow, former board member of the James River Writers, and proud member of the Tall Poppy Writers. She also teaches fiction writing for the MFA program at Drexel University. Originally from Philadelphia, she currently lives near Richmond, Virginia with her amazingly supportive husband of 18 years, and their three beautiful children.

A Good Girl’s Guide to Murder

[…] is the second book I have read this year on the same topic. The first one was Yellow Wife by Sadeqa Johnson, and I must say, Yellow Crocus comes nowhere close to […]

[…] book reminded me of another wonderful book I read last year – Yellow Wife by Sadeqa Johnson, a moving, and terrifying story of the sufferings inflicted by the institution of […]